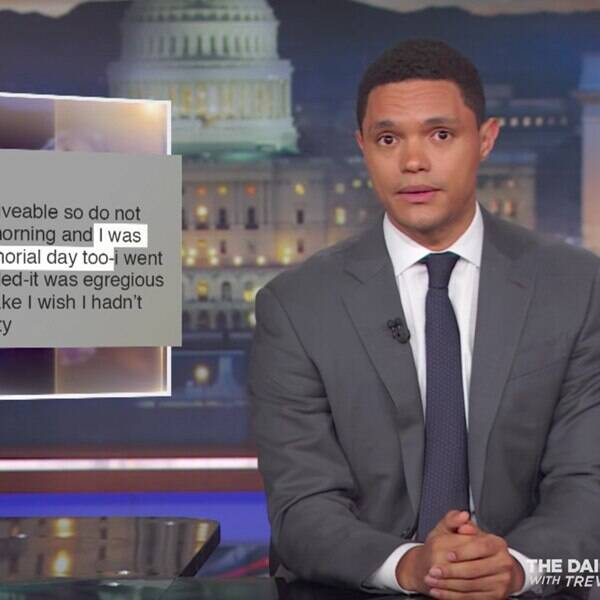 He’s known for being a TV host, comedian and author but he’s also a PCAs nominee!

Trevor Noah is nominated at this year’s E! People’s Choice Awards thanks to The Daily Show being up for The Nighttime Talk Show of 2019. Noah took over the show after John Stewart‘s departure four years ago where he has interviewed celebrities, politicians and activists about everything from entertainment to hard-hitting news.

The author of Born a Crime has brought a fresh perspective to late night and the guests who stop by his show reflect that. Tackling issues like being mixed-race, the body positivity movement, mental health struggles and more with people like Tracee Ellis Rossand Bill Hader, the show feels more relevant than ever.

Noah faces off against seven other contenders to win the award, so to help you cast your ballot we’ve rounded up five of the host’s best interviews this year.

To vote for the star, you can go to the official PCAs voting website or take to Twitter to sound off on your choice.

Be sure to tune into the live award show on Nov. 10 to see if Noah brings home the trophy.

In January, Nobel Peace Prize winner Yousafzai visited the Daily Show set to talk about her book We Are Displaced: My Journey and Stories from Refugee Girls Around the World. Yousafzai was shot by Taliban gunmen in 2012 in an assassination attempt over her activism and in the years since the young advocate has continued to bring international awareness to girls’ education around the world.

While at the show, she discussed misconceptions around refugees saying, “Becoming a refugee is never their first choice. This is the last choice and this is often the only choice that they have.”

She went on to talk about the courage refugees have and encouraged people to actually get to know people from those situations to further educate themselves. Noah recommended his audience to buy the book in part because all proceeds go to the Malala Fund, which focuses on education.

In August, Guerrero swung by the show to promote the final season of Orange is the New Black (which is also a PCAs nominee for both The Bingeworthy and Comedy Show of 2019) where she and Noah talked about how the show has shined a light on immigrant experiences. They also talked about how OITNB was groundbreaking for Netflix, both as one of their first breakout series and as a show that featured many women of color on screen.

The final season of the show was full of intense moments, such as Guerrero’s character (spoiler) finding out she wasn’t born in America and getting deported to Colombia. The character’s storyline hit close to home for Guerrero, who came home one day as a teenager to find that her parents had been deported. Guerrero wrote about the experience in her book, In the Country We Love: A Family Divided.

The star of Barry, Documentary Now and It: Chapter Two talked with Noah about his busy, burgeoning career and revealed that Finn Wolfhard was the reason he was cast in the It sequel. As it turns out, the Stranger Things actor had named Hader as who he thought should play the adult version of himself, causing Hader to joke that, “That kid is so powerful!”

The conversation then turned to Hader’s anxiety, which he has been vocal about, where the actor elaborated on strategies he’s learned to help manage it while on shows like Saturday Night Live.

The star of black-ish came onto Noah’s show to talk about her new show, mixed-ish, a spin-off that focuses on Ross’ character Rainbow and her upbringing in a mixed-race family during the ’80s.

Noah went on to ask Ross if she ever felt “other than” and the actress said she did, elaborating that, “The world around me and the representation and what I saw told me that my hair should be a different way, and that my beauty was defined by a standard that I did not fit into.” We’re excited to see the new series, which navigates storylines with identity, and know it’ll be full of both real moments and plenty of laughs. After all, Ross is nominated for The Comedy TV Star of 2019 for black-ish, so we already know the performer is a comedic force to be reckoned with.

The Good Place actress came by the show in October to talk about landing her role as Tahani on the NBC sitcom, being a “feminist-in-progress” and the harms of diet culture. The former TV host got huge cheers and a around of applause when she said, “I can’t stand in front of a mirror and say, ‘Oh, I love my my thighs, I love my cellulite.’ I can just not think about them and think about my bank account and orgasms.”

A stunned Noah asked, “Did you say, ‘Think about my bank account and orgasms?'” Jamil laughed and said, “Yeah. And, like, world peace.” The funny interaction is fitting for the comedic star and shows why her sense of humor makes her a perfect nominee at this year’s PCAs as well, as she’s up for The Comedy TV Star of 2019.