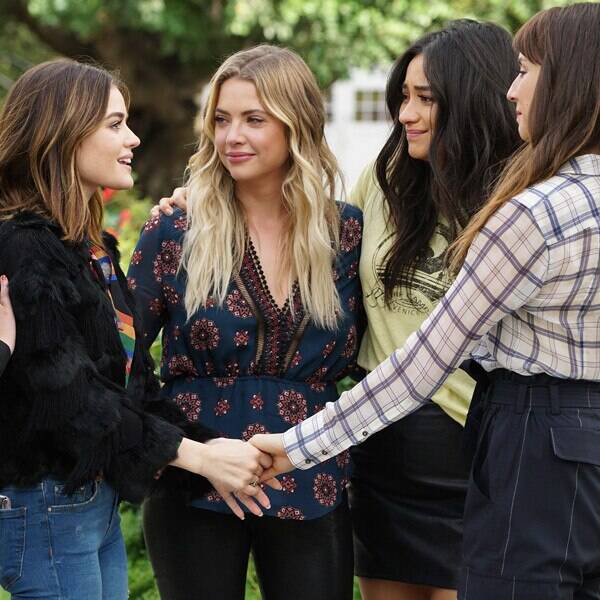 The Pretty Little Liars cast reunited virtually for a good cause, and now we’re really in the mood for donuts.

To benefit Feeding America, Lucy Hale, Shay Mitchell, Troian Bellisario, Ashley Benson, Sasha Pieterse, Janel Parrish, Ian Harding, Tyler Blackburn, and creator Marlene King all got together with moderator Damian Holbrook for a little reminiscing on Friday that actually involved a lot more talk of craft services than you might think. Apparently the donuts offered on the set of that show for seven seasons were good enough to eat five of them per day.

Of course the reunion featured more than just donut memories.

After making it clear that Keegan Allen, who played Toby, was only not present because he’s “in the middle of the mountains” with no service, working on becoming a lumberjack/mountain man, the cast spoke about their favorite scenes and moments from over the years of filming the show.

Sasha Pieterse was 12 years old when they filmed the pilot, but as Marlene King said, “you were so intimidating!”

“Keegan was scared of me. Our first scene together, I was yelling at him. He was really scared of me, which I enjoyed.”

After PLL, Alison became a teacher on The Perfectionists, and Pieterse thought it was “hilarious” that all her students were definitely older than she was.

How did the moms get out of the basement?

“There’s a reason why Pam never drank after that. We decided they drew straws and Pam got the short straw, so she had to take off her clothes and they greased her up with some car oil they found, and she shimmied down some pipe and then let them out.”

The hardest scene to film

While some said that the goodbye scene in the finale was hardest to film, Mitchell said it was hardest to not laugh in scenes with Benson and Blackburn and she had to pinch herself to the point of drawing blood to keep it together.

Parrish said she learned that she was A just a week before filming and she was “truly terrified” but she and Bellisario had a great time during their 19 hour shoot day, “like sitting on the floor laughing.”

Also, for the record, A’s pants are very uncomfortable.

King says Spencer and Toby are fully still together, and Spencer’s practicing law while Toby is building little houses for homeless vets, and “they probably have kids already.”

Remember that time Spencer and Caleb hooked up? We were into it, but not many other people were. Benson said she hated it, but Blackburn thought it was a fun way to shake up the show.

“I feel like it mixed things up. It obviously caused a little backlash, but like…there’s no such thing as bad press, you know what I mean?” he said. “I was obviously a Haleb shipper, as they say, but it was awesome to just mix it up and I feel like the show also was taking a little bit more of an adult turn then. Troian and I did a lot of like suggested nudity that I had never really done.”

“A lot of fans got upset about it, but I still feel like some of the scenes that came out of it—like that scene between me, Ashley, and Tyler, I think it’s one of my favorite scenes,” Bellisario added. “I think it was just wonderful material and it was so exciting to open up those sides of our characters.”

“I was sweating. I was so nervous. It was the most emotional thing for me because I was so nervous, because it was the first time I was going to show people what I had been working on as far as a dialect and how I was going to bring Alex to life and then as soon I was getting through all of that and basically sweating through every piece of clothing I had, we got to the scenes where we were saying goodbye, and then I was just a snotty mess of tears. It was a real up and down table read.”

The last scene that was shot was Aria thinking that Ezra had abandoned her, and King says around 150 people came to watch that last scene, and they finished shooting around 2 a.m. Legendary Burbank staple Smoke House opened back up for the cast and crew.

“I remember getting in my car leaving Smoke House and driving home from Warner Bros, and I was like, that’s the last time I’m going to drive home. And I think I remember crying at like 4am just being like, I can’t,” Bellisario said.

Benson and King remembered taking an Uber home, and Benson slept over at King’s house that night.

Could a scripted show/movie/special be in the cards?

Ian Harding hopes so, but he’s got some requirements.

“I think if it does happen, it has to be pretty extreme. Like I want in the first 10 minutes, one of the people in this Zoom call right now dies,” he said.

Later, the entire cast said they’d come back for a reunion special, and Harding doubled down.

“I’m telling you, as long as my idea holds. Somebody’s gotta die.”