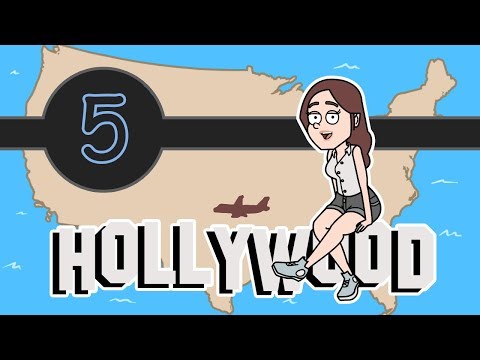 Hey guys! Here we are, finally inHollywood! I just got here in LA, just settled down in my apartment, and I still haven’t met anyone of the people that will live with me

I’m a bit terrified, I just found out we will be six sharing the apartment! But I’m excited to see what's to come! What they say about LA so far seems true, everything here is enormous, the streets are super long and they appear never ending, even house addresses don’t stop at 100 or 200, here they continue over 22000! It’s basically impossible to move without Uber or a car, so far I’ve been using Uber but I hope I’ll make some friends with a car (who knows, maybe I can get a ride!) Everything is divided in districts, LA is so big that basically there are cities inside the city! For example there’s the city of Malibu, the city of Downtown, Hollywood Everyone here looks more relaxed, calm, I’d say less stressed I was walking down the street and people would smile at me! It’s always sunny here, right now there’s some wind but I can’t complain, the temperature is perfect, and the sun always shines in the city of Angels! Everyone looks so different, I couldn’t describe a “typical” LA person because there are no “locals”, the city it’s such a big melting pot that here you can find people from every race, age or nationality you could think of They told me LA is a city “of passage” and I’m starting to understand why, everyone that I met so far is here just for a while, working, visiting, or trying to make it as an actor (such as myself), but generally they don’t stay here too long, just the few necessary years and then they move Something else that I noticed and it was a bit weird for me is that here it’s super normal to be an actor Every waiter, every cashier

everyone is an actor! Actually saying that you are a waitress or an actress here is pretty much the same thing That’s one of the first differences I noticed In Italy people are more weirded out if you say “I’m an actress”, while here they usually answer “cool! Me too” and I’m like “oh, cool! Perfect!” It’s weird but I guess it’s nice to know that you’re not alone! Well, for today that was it! If you would excuse me, I’ll go now to enjoy my sunset in front of the Hollywood sign and we’ll keep updated, see you super soon! Kissessssss!