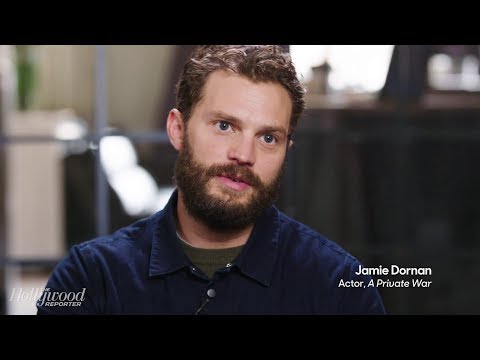 You know he (Matt) comes from a documentary, he has never tolerated an interpretation of PTSD You know, he wanted to wait until I was

– Broken Basically, you know A Private War is a study of a character, the incredible war correspondent, Marie Colvin

It is a real fact She went to the most dangerous places in the world, witnessing the atrocities of the war and it is also about the relationship she had with the incredible photographer Paul Conroy, played by Jamie And, you know, it's a meditation on the cost of war for those who report it and for those who pick it up in the middle The loss of Marie is very recent, she was murdered in 2012, so for her friends and family it is very, very painful And I think I knew that we had to treat him delicately in his memory and gain the trust of the people who knew her, because obviously they were going to be our great resources

I guess I felt, probably like Jamie, that I could not get into his mind, unless it was inside his body and she had a very strong character, also physically, so I needed to get rid of my own physique and take hers As he did with Paul, right? Yes, but I made a bit of a trap with Paul, obviously, I had the luxury of having him around and he was with us throughout the filming in Jordan and London Which is almost unheard of, you know, having the luxury of as an actor, having the person you're performing within 20 feet of me all the time I want to say if I now make his voice my body changes It's very weird

But it did not feel so weird in the end already It is not used anywhere, it is a curious feeling, it goes in parts I'm sure that with Paul it happens the same and his Liverpool accent I know It's amazing how the accent comes out alone

I lost an inch and a half to play Marie Because I knew that she carries her shoulders in a different way, you know in a way that she took, and I think being prepared for that attack that could come at any time When I went to my doctor, I saw that he was writing my measure and I said it was wrong, that I had to measure myself again We did it and it was not like that I lost an inch and a half

But it's rare that you can take something from someone who actually does it, changes you Which was a strange feeling That's cool SUBTITLED BY @ JAMIEDORNANES1