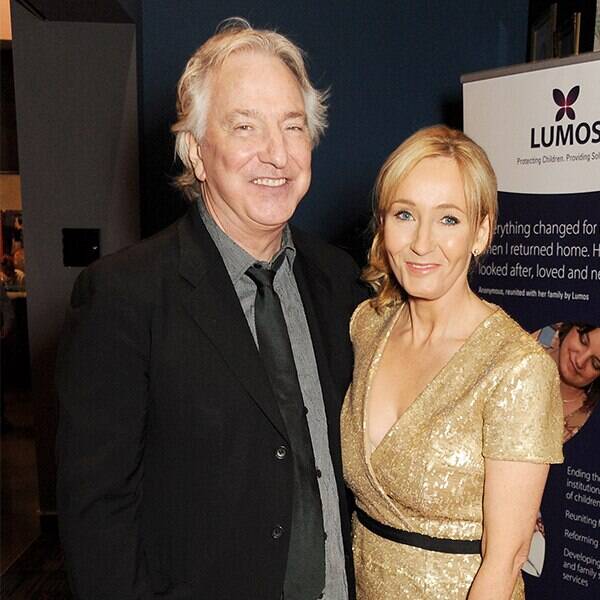 Today on Twitter, a fan wrote to J.K. Rowlingto share that, “Tonight in Italy they air Harry Potter and the Deathly Hallow Part 2. As always, I’m NOT ready to say goodbye to Severus Snape. Thank you @jk_rowling for this unique character and for convincing Alan Rickman to portray him—we had the perfect Severus Snape.”

To which the 54-year-old author replied, “In Harry Potter & the Cursed Child, Snape makes his first appearance with his back to the audience. At the dress rehearsal I saw him in his long black wig & my eyes filled with tears because, for a split second, my irrational heart believed when Snape turned around, I’d see Alan.”

The legendary actor who also appeared in Love Actually and Die Hard died on January 14, 2016 in London surrounded by family and friends. After a battle with cancer, the actor died at 69.

In 2018, two years after his death, Rickman’s personal letters revealed that the late actor had some frustrations over his role as Professor Severus Snape.

The actor’s personal items were put up for auction at the ABA Rare Book Fair in London, his collection was released by Neil Pearson Rare Books and it included the actor’s scripts, photographs, letters and personal diaries.

One of the letters from Harry Potter producer David Heyman to Rickman thanking him for his work on Harry Potter and the Chamber of Secrets read, “Thank you for making HP2 a success. I know, at times, you are frustrated but please know that you are an integral part of the films. And you are brilliant.”

In Harry Potter & the Cursed Child, Snape makes his first appearance with his back to the audience. At the dress rehearsal I saw him in his long black wig & my eyes filled with tears because, for a split second, my irrational heart believed when Snape turned round, I’d see Alan. https://t.co/qC3xxmwz3d

Before his death, Rickman also spoke to the Los Angeles Times on his decade playing Harry Potter‘s Severus Snape.

“It was a punctuation mark in my life every year because I would be doing other things but always come back to that, and I was always aware of my place in the story even as others around me were not,” Rickman told the publication. “Am I sad? The point about a great story is that it’s got a beginning, a middle and end. The ending of this story was quite popular and beautifully judged by Jo Rowling and David Yates, so it’s not a cause for sadness; it’s a cause for celebration that it was rounded off so well.”