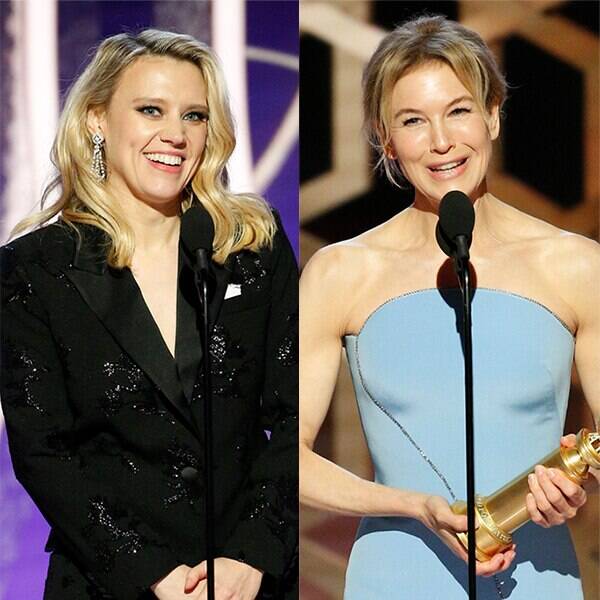 Parts of his 2020 Golden Globes monologue were unintelligible due to the sound removal required for the pops of profanity, but the comedian, returning as host for the fifth time, left no taboo stone unturned, from #MeToo and Jeffrey Epstein to race relations and Judi Dench‘s enjoyment of lifting her leg and licking her own… um…

It was a Cats joke.

Anyway… almost everything that came out of Gervais’ mouth had jaws dropping all over the room (poor Cecil B. DeMille Award honoree Tom Hanks didn’t know what to do with his face!), so we’ll write his zero-f–ks humor off as a given and move on to the night’s real surprises and memorable moments once they started handing out the awards.

1. The Irishman Takes a Hit: Actually, we still have the Screen Actors Guild (and Directors Guild and Producers Guild…) Awards to go, but the Oscar race came into clearer focus after 1917 and Once Upon a Time…in Hollywood were named, respectively, Best Motion Picture, Drama, and Best Motion Picture, Musical or Comedy—leaving Martin Scorsese‘s elegiacal mob epic without any wins Sunday.

2. Three-Legged Race: Sam Mendes‘ surprise Best Director win for his gut-churning, magnificently shot World War I drama makes it more likely that the Academy is once again going to award directing and Best Picture Oscars to different films. They’ve been splitting the bill more often than not lately and it’s hard to see them denying Scorsese and Quentin Tarantino‘s ode to a 1969-era La La Land that maybe wasn’t exactly the way he portrayed it (though isn’t that really the best way to remember things).

“This is the biggest surprise, thank you very much!” said Mendes, who was inspired to make 1917 by his own grandfather’s service during the “Great War,” taking the words right out of our mouths.

And…were those shots fired at Scorsese—he of the decision to make a movie with Netflix that was available to stream a few weeks after a limited theatrical release—when Mendes accepted for Best Motion Picture, Drama, at the end of the night and noted how hard it was to get people to come see movies “in a cinema, and I really hope people will turn up to see it on a big screen for which it was intended”?

Not really—it certainly wasn’t anything personal—but you know not every filmmaker is on board with this smaller-screen thing.

3. Come On, Get Happy: “Well, hi, everybody, it’s nice to see you,” Renée Zellweger, who channeled Judy Garland and won Best Actress in a Motion Picture, Musical or Comedy, for her efforts in Judy, greeted the audience. “Thank you to the Hollywood Foreign Press for inviting me back to the family reunion.”

Having made only a few films (and, last year, a Netflix series) over the past decade, it was lovely to ring in 2020 with a toast to Zellweger, who deserves every ounce of applause for being strong enough to step away and live her life privately when she no longer felt like being a part of all… this. But we’re mighty glad she’s here again.

4. Hollywood Hearts Brad Pitt: It turns out, Pitt’s as good as British people at giving acceptance speeches—award-giving bodies should really do this more often! Twenty-four years after first winning this award for 12 Monkeys, he won Best Supporting Actor in a Motion Picture for his turn as stuntman Clint Booth in Once Upon a Time…in Hollywood, a role that fit him like a well-worn work glove. (Because Best Screenplay Winner Tarantino made sure of it, of course.)

In thanking co-star and “partner in crime” Leonardo DiCaprio, Pitt said, “He’s an all-star, he’s a gent, and I wouldn’t be here with you, man. I would’ve shared the raft.”

And with that, Brad Pitt invoked Titanic and our hearts have gone on and on.

5. First Time’s the Charm: The Hollywood Foreign Press forgot about The Handmaid’s Tale this year, but Hulu got some love in the form of Ramy Youssef‘s win for Best Actor in a TV Series, Musical or Comedy, for Ramy, which is based on his own life as a contemporary observant Muslim. The HFPA loves to honor new shows, usually for very good reason, as was the case tonight. (Hulu’s The Act, which seems old because of the Emmys-Globes space-time continuum but is from last year, also scored a win for Best Supporting Actress in a TV Series, Limited Series or TV Movie for Patricia Arquette.)

“Look, I know you guys haven’t seen my show,” the pleasantly wowed Youssef cracked congenially. “Everyone’s like, ‘Is this an editor?’ We made a very specific show, about an Arab Muslim family, living in New Jersey, and this means a lot to be recognized on this level.”

Another charming first: Awkwafina won her first Golden Globe at her first-ever time at the show—Best Actress in a Motion Picture, Musical or Comedy—for the heartwarming (and a little heartbreaking) The Farewell.

6. Trailblazers: It’s easy to forget, now that she’s the current queen of daytime and one of the most successful entertainers in the world, that Ellen DeGeneres was once a young comedian and sitcom star who lost her show after making the polarizing decision to come out via the cover of TIME in 1997. But Kate McKinnon didn’t forget, and her tribute to the night’s Carol Burnett Award recipient was a showstopper.

The show went on, of course, because they and we are professionals, but hot damn, if McKinnon didn’t offer up a pitch-perfect reminder that we had to wrest the freedoms we have now from a society that would have been content to never allow them, following the paths taken by others and blazing new trails along the way. And though this was a joyful moment, it was also a tacit reminder that there’s a lot left to be done and everyone, including those whose freedoms have never been in question, needs to be involved.

7. Not So Much Netflix: HBO—whose new streaming-only service, HBO Max, debuts in May with all of your Friends accounted for—showed it still had plenty of gas left in the tank in cable form as the night’s most winning purveyor of television.

The almost too-close-to-home (not because we’re rich, but because of cable news) dysfunctional family saga Succession won for Best TV Series, Drama, and Brian Cox—demanding, untrustworthy patriarch Logan Roy—won Best Actor in a TV Series, Drama, while Chernobyl was named Best Limited Series or TV Movie and, from the haunting production about the 1986 nuclear accident, Stellan Skarsgård won Best Supporting Actor in a TV Series, Limited Series or TV Movie.

Netflix only had one win, Best Actress in a TV Series, Drama, for Olivia Colman, who ascended in The Crown‘s third season to the role of Queen Elizabeth II.

Amazon nipped at HBO in the exact place everyone guessed: Best TV Series, Musical or Comedy, and Best Actress in as much for Fleabag and the ever-ascendant Phoebe Waller-Bridge.

8. Stars on Stage Getting Real: Every word spoken tonight in favor of a more just, equitable and livable world was especially poignant, in part because of the horrific wildfires raging in Australia—where Best Actor in a Limited Series or TV Movie Russell Crowe remained tonight—but also because there are so many issues bearing down on us just days into 2020, it’s hard to know which one to address first.

Presenter Jennifer Aniston read the message Crowe sent in absentia about the dire moral obligation to address climate change (ironically he won for Showtime’s The Loudest Voice, playing late Fox News mastermind Roger Ailes, not exactly a pusher of scientific truths). Patricia Arquette, accepting for The Act, was all about voting in November. Michelle Williams, who’s pregnant with her second child, spoke up about the importance of defending women’s reproductive rights. And nearly lifelong vegan Joaquin Phoenix, Best Actor in a Motion Picture, Drama, winner for Joker and now officially the front runner on Oscar night, gave a shout-out to the evening’s menu, which for the first time was entirely plant-based, in appreciating the acknowledgment of big agriculture’s link to climate change.

What these actors said won’t be for everybody. Some viewers at home may even declare for the fourth year in a row that they’re never watching the Golden Globes again. But that doesn’t make anything the celebrities said any less vital. And they weren’t just speaking for themselves—they were speaking for all of us.

Watch E! News Monday at 7 a.m. for a recap of the biggest 2020 Golden Globes moments followed by Pop of the Morning at 11 a.m.