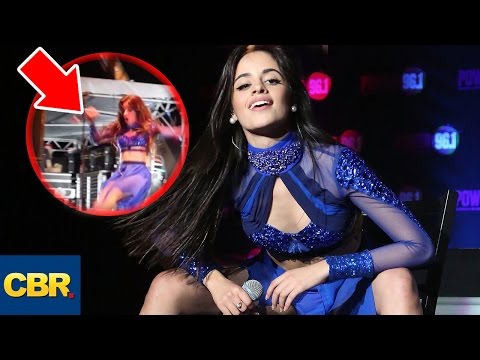 10 Hilarious Celebrity Moments Caught Live On Camera In today’s day and age it is pretty safe to assume that wherever you are, cameras are rolling This is a thought that makes some people feel very safe and other feels very afraid and paranoid

Wherever you stand on the issue, we think that we can all agree that no one is bombarded by cameras quite like celebrities Whether they are starring in their own reality television show or just walking to the grocery store, celebs are being recorded more than anyone else! Some may argue that it’s unfair while others might simply say that it comes with the fame With the cameras constantly rolling, we are bound to end up with more than a few funny, bizarre or embarrassing moments We are taking a look at some uniquely funny moments caught on tape in our list of 10 Hilarious Celeb Moments Caught On Live Camera Kim Kardashian and Kris Humphries Burping The hit reality television show Keeping Up With The Kardashians has provided countless amounts of hilarious and memorable moments over the years

From weddings to fights and everything in between, it can be hard to keep up One season 6 moment features one of the most hilarious moments ever recorded for the show Kim and Kris Humphries (the pro basketball player that she married for 72 days) are having dinner when Kris decides to turn and burp into Kim’s open mouth Rather than freak-out, Kim calmly turns and returns the favor – in a bizarrely flirtatious manner Kris then provides this hilarious explanation for their actions: "Birds throw up and then feed it to their children

This is nothing," We don’t think too many people were surprised their later marriage only lasted 72 days! Donald Trump Hugs Flag Wherever your politics may stand, We think that we can all agree that Donald Trump’s campaign has been a very unique one Putting aside all of the scandal and actually damning footage, there have been some moments that are downright hilarious The man is undoubtedly charismatic and certainly knows how to make sure every news program mentions his name – every night One of the most hilarious on camera moments from trump came in October when he came on stage to give a speech and entered by giving the American flag a lingering, but admittedly patriotic, hug

Yes, that is right, the republican nominee for president got on stage, hugged an inanimate object lovingly and then proceeded to give his speech What a time to be alive Brian Cranston Dresses Up As Himself – Comic Con 2013 Comic-con is an awesome place Every year fans of movies, tv, comics and culture in general gather together in San Diego to celebrate There are special panels, activities, announcements, trailers and of course costumes

In 2013, something hilariously awesome happened when Brian Cranston decided to dress up in costume before his panel for Breaking Bad The hilarious part of this story is that he dressed up as himself, in character as BB’s Walter White Cranston was able to pass through the crowd unnoticed and the crowds surprise is genuine when he takes off the mask at the panel Sometimes the best place to hide – is in plain sight Shia Labeouf Shia Labeouf is one weird guy

He is kind of like a human 8-ball, you shake him up and you never know what he is going to say That being said, the man does have some real talent But It can be hard to focus on between all of his bizarre stunts and actions One of his most famously odd moments that was caught on tape came in 2014 when he wore a paper bag on his head to film festival that read “I AM NOT FAMOUS ANYMORE” He looked hilarious in his bag and the ironically funny part about this story is that because this stunt got him so much media coverage, his message about not being famous anymore didn’t really hold true

We like to think that the former Disney child star planned it all out that way Well played, Shia, well played Jason Segal and Paul Rudd – I Love You, Man interview There is a certain process that actors must go through when they are preparing for their movie to be released There can be special marketing event, talk show appearances and most commonly, interviews with the press During an interview for their comedic hit I Love You, Man, Jason Segal and Paul Rudd decided to have some fun with their interviewer

They went on some insane rants, did some impressions and even spent a few minutes discussing Segal’s imaginary friend “Giddian” Luckily, the interviewer was a great sport and it looked like everyone involved had a great time Rumors have speculated that Rudd and Segal may have been smoking some “Seth Rogen” before this interview, but we will let you be the judge of that yourself Ashlee Simpson – SNL Lip sync Believe it or not, there was a time, not that long ago, where Jessica and Ashlee Simpson were two of the hottest names in pop culture While Jessica had a somewhat natural decline from super stardom, Ashlee’s fall from grace was less, well, graceful

During her performance as musical guest on Saturday Night Live her music cut out and it exposed her to be lip-syncing She looks incredibly awkward on stage silently mouthing the words The video went viral all over the Internet and in the news and her career and musical status went down the drain We can understand some lip syncing when you are full out dancing but pumping in the music when you are just standing around on stage, we cannot accept Camila Cabello Slips on Stage (Fifth Harmony) Camila Cabello is one of the five girls that make up the world famous pop group “Fifth Harmony”

The group was formed during a season of The X-Factor and some people have said that they are the female One Direction The group has a huge online presence and very active fans which made it all the more rough for Camila Cabello when she took a big wipeout in the middle of performing their hit song “Miss Moving On” on tour Camila takes quite the tumble and if she ever wants to re-watch it herself, she can just google the incident and watch one of the hundreds of recorded videos It’s bad enough to fall in front of a huge live crowd, not to mention the entire online world Hilary Clinton Dab (On Ellen) The term “cringe” is one that gets thrown around the Internet pretty liberally lately

There are cringe compilations, competitions and much more, but sometimes a moment comes along that is so – cringe worthy – that it must be mentioned Gearing up for her presidential campaign, democrat Hilary Clinton was doing a lot of media appearances with the goal of appearing more relatable and fun These efforts may have backfired on her however when she attempted to perform the popular “dab” dance move on Ellen and looked absolutely ridiculous Everyone from late night hosts to internet trolls have been making fun of the moment ever since and probably will be for a while Steve Harvey Messes Up Winner of Miss Universe 2015 There was a time when most internet searches for “Steve Harvey” were just people looking for the hilarious Family Feud host reacting to people’s ridiculous answers on his show

In 2015, all of that changed when Steve Harvey royally butchered the final results announcement at the Miss Universe pageant Harvey accidentally read the wrong name and even awarded the wrong woman with first prize The look on his face is priceless as he realizes his mistake and has to retract his statement and reassign the first place prize We feel bad for laughing at this one, but it’s too hilarious for us to handle Justin Bieber Walks Into A Revolving Door Whether you absolutely hate him or you absolutely love him, you have to admit that Justin Bieber is a talented dude

He can sing, dance and play instruments very well but he may not have mastered the art of going through a revolving door yet Look, we get it and we’ve been there Sometimes those doors can be tricky and you can find yourself in an awkward moment and you hope no one sees Unfortunately, if you are Justin Bieber, the cameras are always rolling and they definitely caught the hilarious footage of him struggling through a revolving door and even bumping his head in the process Bieber, if you’re watching, is it too late now to say sorry? So there’s our list of 10 hilarious celebrity moments that were luckily caught on tape

Were there any other funny moments that we missed? Which one was your favorite? Let us know in the comments section below and be sure to subscribe to our channel for more fun videos – like this one!