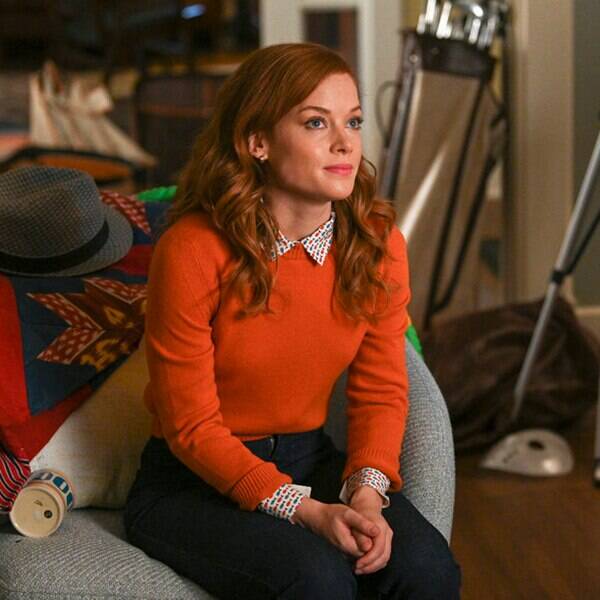 The series stars Jane Levy as Zoey, a socially awkward computer programmer who suddenly gains the ability to hear and see people’s emotions through elaborate musical numbers. It’s a power that not only allows her to connect with other people in a way she never could before, but also allows her to help those people in ways she never could before. Creator Austin Winsberg likens Zoey to a superhero, so that freaky MRI that gave her these powers is basically The Flash‘s lightning strike.

“One of the philosophies of the show is that it’s kind of a superhero show, and if you look at it that way, then season one could be considered the superhero origin story, where it’s the person getting their powers and getting accustomed to those powers and finding their strength in those powers,” he tells E! News. “Then beyond that, you can go further with who else has this, what can those powers do, and how can she manifest them, who’s against her…you could go down all those different comic book superhero mythological lanes.”

“For me, the most important thing is that I always want to be true to the characters and the emotionality of the show and what feels real, and I don’t want to take this show to such a heightened place that it stops feeling grounded and relatable,” Winsberg says. “I think ultimately, it’s about a girl trying to figure herself out, and how she fits in the world, and how she communicates and relates to other people.”

Winsberg created the show alongside Emmy-winning choreographer Mandy Moore. She and Winsberg met a decade ago when she choreographed a dance number for the wedding of one of his good friends. Winsberg was already a fan of Moore at that point since he was a “huge reality TV junkie” who loved So You Think You Can Dance, and remembers trying to hold back his “fan crush” while she was teaching the dance.

They reunited at a lunch years later, and then two weeks later, the pilot of Zoey’s Extraordinary Playlist got picked up.

“The first call I made was to Mandy saying like, ‘Pipe dream…is there any universe?’ I thought best case scenario, maybe I could get Mandy do to the pilot with us.”

Normally, as Moore explained, choreographers come in very late in the game for a project like this, which she says feels really “antiquated” and results in numbers that feel saccharine and a little shallow since the choreographer’s not part of the storytelling.

“I’m super lucky that in those initial pilot moments, we would just sit and hash out dance, like how does dance live in this world,” Moore said.

“We spent days in a room, in a dance complex, watching music videos or movie moments where we want it to be more like this and less like this,” Winsberg said.

Dance is as much a part of the show as the singing is. One of the sets even has risers already built into it, meaning it’s primed and ready for a musical number at any second, and Winsberg says he and Moore are a dream team.

“I mean, I want to get hats made of this, but I say this to Mandy all the time: DFWM. Basically, it’s like Don’t F–k With Mandy. I really think that Mandy’s a genius, and there’s never a moment where Mandy and I don’t see things the same way,” he says. “I treat her 100% like my partner on the show. I don’t believe that I could do this show without Mandy.”

But a major part of the show is based in Winsberg’s own life. Until director and EP Paul Feig came in, Zoey’s character was male, coping with a father who has PSP, like Winsberg’s own father did. PSP, or Progressive Supranuclear Palsy, is a degenerative disease where parts of the brain slowly deteriorate, and in the case of Zoey’s dad Mitch (Peter Gallagher), he has lost the ability to speak or move much at all. Zoey finds she can communicate with her father with her powers, allowing her to find ways to help him communicate with the whole family.

While Winsberg did not suddenly develop the ability to hear people’s emotions through music, he says everything else that happens with Mitch really did happen with his own father.

Peter Gallagher did his own research, and showed up knowing exactly what he needed to do.

“He showed up on day one with all of the physicality and looking uncannily like my dad at certain times, and sometimes, it’s like I’m able to compartmentalize it and be like, I’m shooting a TV show, and once in a while I’ll be watching a scene and I’ll just get crazy emotional and I’ll have to leave the room, because something will happen that will trigger a really specific moment for me.”

PSP, Winsberg says, hasn’t been well-documented because it’s fairly rare, so he’s not even sure where Gallagher did his research, but the actor became a kind of expert.

“He is a very strong advocate on set, especially when people are like, can you move your hand a little? He’s like, no, I can’t move my hand! He’s very strong about what is real and authentic and being true to the disease and what my dad went through,” Winsberg says.

“For a long time, that was romantic comedy because of my dating life and misadventures and my marriage and kids stuff, but I knew from the moment this happened…I needed some distance from it, but going back three or four years now, I’ve been wanting to write something about my dad and that time in our lives, so I beat myself up when I think I’m not being authentic enough,” Winsberg says. “Enough time has elapsed where I wish I had more specific memories that I could be even more specific about it, because I feel like if I’m not being honest about it, then I’m doing it a disservice.”

Zoey may be a sort of superhero, but she’s not fighting off evil supervillains or even taking on a secret identity. She’s just helping the people around her connect in a way they didn’t know they could through music and dance, while honoring real-life family along the way. Feels pretty extraordinary to us.

The pilot of Zoey’s Extraordinary Playlist is currently available on NBC.com and Hulu, and the series premieres Sunday at 8 p.m. on NBC. Stay tuned for more from the interview with Winsberg and Moore next week.