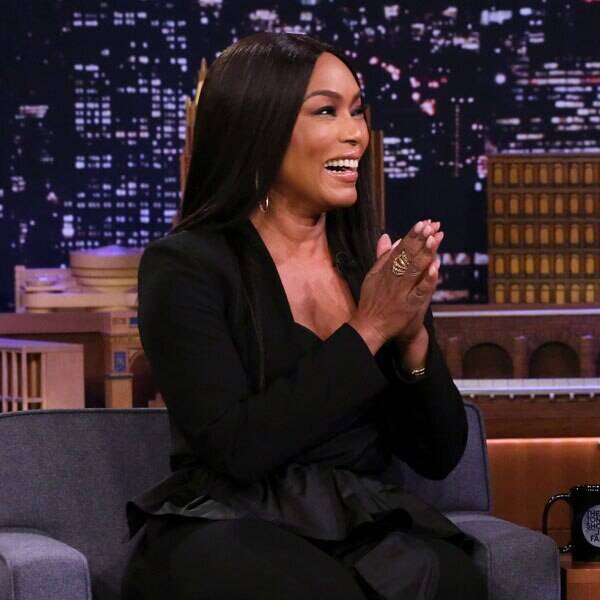 Doing his best to get more details out of the Waiting to Exhale star, who plays matriarch Ramonda in the Marvel action flick, Jimmy said, “You were telling me backstage that they decided to change the costume of Black Panther?” Going along with the joke, Angela quipped, “Jimmy, I was telling you that in confidence. You are now—you did not!”

Once the Saturday Night Live alum assured the audience that he was kidding around, Angela jokingly backtracked, “I know nothing about nothing. I have nothing to talk about.” Jimmy responded, “We have guests on the show from these Marvel movies, and they’re not allowed to talk at all. So, I’m like, ‘Alright!'”

Switching gears in an effort to avoid any spoilers, the duo discussed how Angela will be celebrating her husband Courtney B. Vance‘s 60th birthday this weekend.

After admitting that she’s a more spontaneous planner, the 9-1-1 star said that she’s going to have a hard time topping the star-studded b-day bash that the American Crime Story actor threw for her.

“Well, he gave me a party and wonderful people were there,” she recalled. “Snoop [Dogg] was there. I danced with him. He danced with everyone—amongst other things. Oh, he brought the love. And the joy…John Legend surprised me. [He] came and sang ‘Happy Birthday.'”

Speaking of star-studded affairs, Angela also reminisced about meeting Lizzo for the first time at the 2020 NAACP Image Awards, where the superstars were both nominated for Entertainer of the Year. While on the red carpet, the Boyz N The Hood star was under the impression that the “Juice” singer wouldn’t be attending the event and stopped her interview mid-way to introduce herself.

“So, I’m on the red carpet talking to one of those reporters and he’s like, ‘Oh, yes, congratulations. You’re here. You’re up with Lizzo. And there she is,'” Angela recalled. “And I was like, ‘What?! This interview is over!'”

“She’s a delight,” Angela continued. “And a couple of hours before that, my daughter and I were just singing her song in the car, you know, at the top of our lungs. She’s the best.”