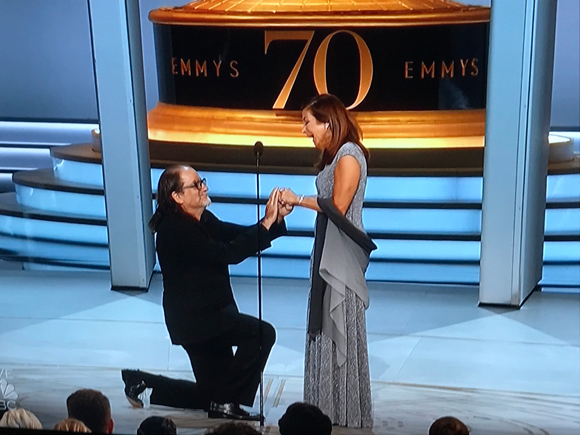 Now THIS is good TV!

On Monday, at the 2018 Emmys, Glenn Weiss won the award for Directing for a Variety Special for his work on the Oscars.

Related: All The Red Carpet Looks From The Emmys!

However, while on stage, the director asked his girlfriend Jan Svendsen for her hand in marriage!

After the lucky woman walks up, Glenn gets on one knee and proposes! As seen here:

And the award for first (and best) proposal at the #Emmys goes to! pic.twitter.com/SRXxlBpuoW

Out of everyone in the audience, Leslie Jones had the BEST reaction!

After the moment went viral, social media couldn’t contain their excitement! See all the reactions (below):

I DON’T KNOW WHO THIS GUY IS BUT SHOOT YOUR SHOT BRO #Emmys pic.twitter.com/ZbceeFcT1m

No pressure, Jan. You’re just getting proposed to on stage on national TV during the #Emmys. At least 300 people are watching.

This dude for real is proposing to his girl at the #Emmys pic.twitter.com/tsKN4d9mmo

Maybe the greatest Emmys moment ever??!!

#Emmys: a proposal on live television between 2 people whose names I don’t know and whose relationship I have no investment in.

Tarte Flash Sale: Save 50% Off on Bestselling Foundations

17 Impulse Buys That Are Now Must-Haves for Us