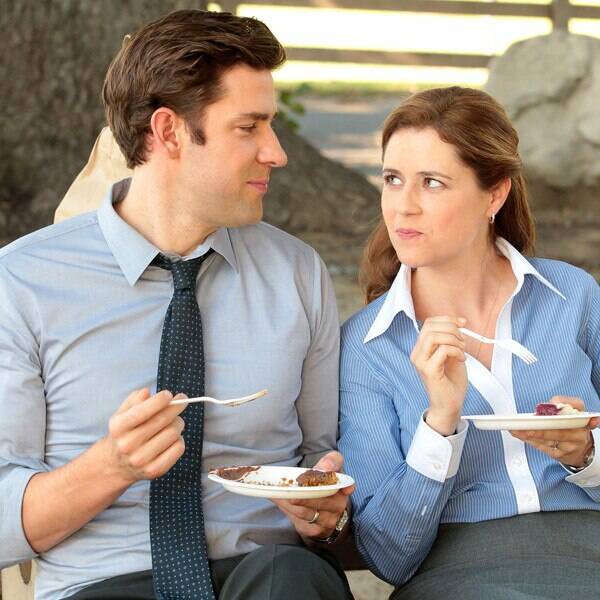 In a new profile in Esquire, John Krasinski has said that he’s 100% down for reunion of The Office, despite years of many of us assuming John Krasinski has grown too famous to return to his roots as Jim Halpert. Apparently, we were wrong.

“The Office was absolutely everything to me,” Krasinski said in the interview, which was pegged to the upcoming release of A Quiet Place 2. “I mean, it is my beginning and my end. I’m pretty sure at the end of my career I’ll still be known for Jim. That was my first experience with Hollywood. It was the first creative family I’ve ever had. In many ways, they will always be the most important people in that most important experience in my career. So yeah, if they did a reunion, I would absolutely love to do it.”

And we’d absolutely love to see him do it!

The Office is leaving Netflix at the end of the year and is headed to NBC Universal’s new streaming service, Peacock, which officially launches in July. NBCU’s former head of streaming Bonnie Hammer (who has since moved to head of NBC Universal Content Studios) said she hoped for a reboot.

“It is my hope and goal that we do an Office reboot,” she told Deadline. “The Office comes back to us in January 2021. It is my hope that we can figure what that great reboot would be. We are having conversations.”

In October, in an interview with EW, Office showrunner Greg Daniels said he really wasn’t sold on the reboot idea.

“It was such a perfect thing that I would hesitate to open it up. We got the chance to end it the way we wanted to end it. It wasn’t like we were interrupted in the middle of a run or something. So in a sense it’s completely an artistic whole. But, that said, I don’t know, the cast every now and then talks about getting back together in some form, but I don’t see it being a reboot like the way Will & Grace was rebooted,” he said.

He also wasn’t sold on the idea Krasinski has previously suggested, like a Christmas special.

“My biggest concern would be disappointing the fans,” he said. “People will watch the entire series and then roll right into watching it again, and to me that means we ended it properly.”

Steve Carell also doesn’t seem to be on board with a reboot, or even a revisit.

“Because The Office is on Netflix and replaying, a lot more people have seen it recently,” he said. “And I think because of that there’s been a resurgence in interest in the show, and talk about bringing it back. But apart from the fact that I just don’t think that’s a good idea, it might be impossible to do that show today and have people accept it the way it was accepted 10 years ago. The climate’s different,” Carell told Esquire in 2018.

“I mean, the whole idea of that character, Michael Scott, so much of it was predicated on inappropriate behavior. I mean, he’s certainly not a model boss. A lot of what is depicted on that show is completely wrong-minded. That’s the point, you know? But I just don’t know how that would fly now. There’s a very high awareness of offensive things today—which is good, for sure. But at the same time, when you take a character like that too literally, it doesn’t really work,” he continued.

Currently, you can hear an Office reunion every week as Jenna Fischer and Angela Kinsey are recapping the show and sharing tidbits episode by episode on the podcast Office Ladies. At the very least, Krasinski could join them as a guest to shed light on even more of Jim and Pam’s best moments.

Just this week, Fischer opened up about what was in the note that Jim almost gave Pam inside the teapot he got her as her Secret Santa in season two. She didn’t get to read the note until season nine, as the show was beginning to wrap up.

“In that episode in season nine, I believe [Greg Daniels] suggested to John that he write a personal message from himself to me just saying what our time together on The Office meant to him, because we were wrapping up filming,” Fischer said. “We were wrapping up the series and we were all so emotional at that time, you know? And so that was his goodbye.”

Fischer didn’t have a clue what the note was about to say.

The Office is currently streaming on Netflix, but will be available on Peacock in 2021.