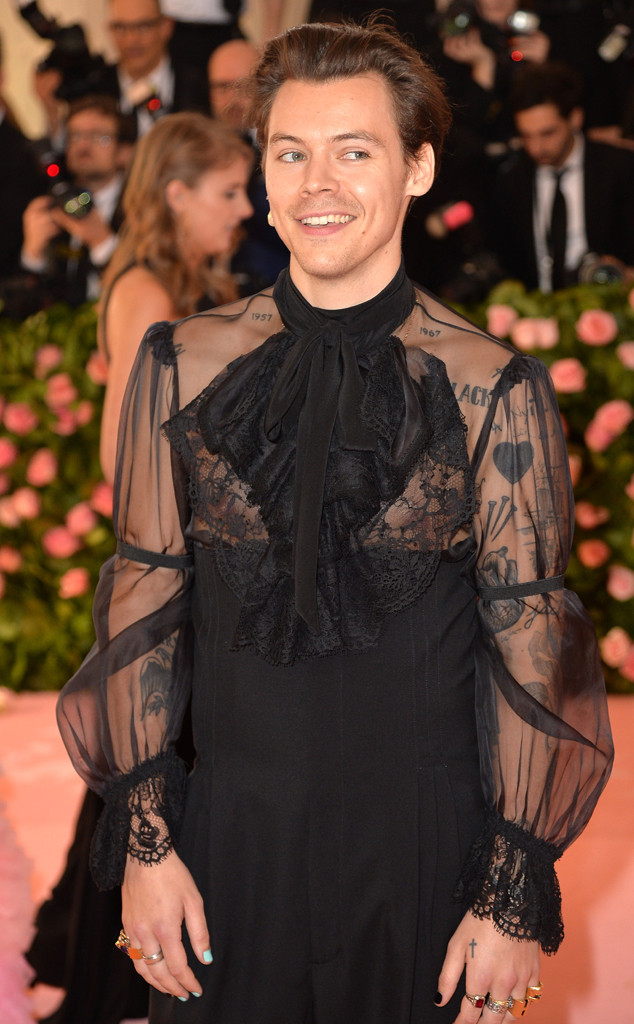 When it comes to Harry Styles‘ sexuality, there’s no fine line.

The 25-year-old star, who has been in the spotlight since his One Direction days, is used to being asked personal questions. However, it’s not every day that a high-profile celebrity answers honestly and openly.

But that’s what sets the Fine Line singer apart.

Speaking to The Guardian, the British star was refreshingly candid about his sexuality when the topic was brought up. But before touching on the subject, Styles explained his audacious fashion, including his electrifying ensemble at the 2019 Met Gala, where he donned a peek-a-boo lace blouse and a pearl earring.

“What women wear. What men wear. For me it’s not a question of that. If I see a nice shirt and get told, ‘But it’s for ladies.’ I think: ‘Okaaaay? Doesn’t make me want to wear it less though,” he said. “I think the moment you feel more comfortable with yourself, it all becomes a lot easier.”

For the pop star, he explained that he uses fashion as a form of expression, something that has taught him about self-acceptance.

“A part of it was having, like, a big moment of self-reflection. And self-acceptance…,” he shared. “I think it’s a very free, and freeing, time.”

“I think people are asking, ‘Why not?’ a lot more. Which excites me. It’s not just clothes where lines have been blurred, it’s going across so many things. I think you can relate it to music, and how genres are blurring…,” Styles added.

When asked if his sexuality also applies to those same blurred lines, he simply responded with a “yep.” If anything, the 25-year-old star admitted he’s sort of baffled why anyone is interested.

“Yeah, I think I do mean that. It’s not like I’m sitting on an answer, and protecting it, and holding it back,” he said of his sexuality. “It’s not a case of: I’m not telling you cos I don’t want to tell you. It’s not: ooh this is mine and it’s not yours.”

The Fine Line singer clarified that he’s not adding little hints or sending any subliminal messages about his sexuality either. Something many of his fans wondered with his new album.

He added, “And more than that, I dunno, I just think sexuality’s something that’s fun. Honestly? I can’t say I’ve given it any more thought than that.”

Of course, the former One Direction member knows that being asked these questions comes with the territory. However, he’s also aware that he can share and reveal as much as he wants to.

“What I would say, about the whole being-asked-about-my-sexuality thing – this is a job where you might get asked. And to complain about it, to say you hate it, and still do the job, that’s just silly,” he said. “You respect that someone’s gonna ask. And you hope that they respect they might not get an answer.”