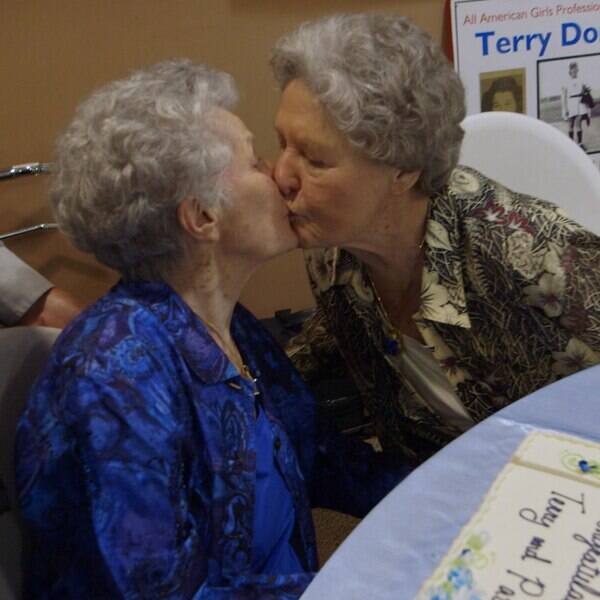 There’s no secret here: A Secret Love has pulled on the heartstrings of Netflix viewers.

The documentary tells the story of the decades-long relationship between Terry Donahue and Pat Henschel and their late-in-life health decline and conflicted decision to enter an assisted living facility. Directed by the pair’s great-nephew Chris Bolan, A Secret Love features the two women recalling their early love story in the 1940s when they played baseball with the organization that served as the inspiration for A League of Their Own and tracks the family conflict surrounding Terry’s declining health.

“They just started telling us their story, dating back from the 1940s,” Bolan told the Chicago Tribune. “I was just absolutely amazed, and at the end of it they started dancing in the living room together. I remember thinking, ‘Ohmigod, I have to tell this story.'”

Filming started in 2013 and lasted years. Cameras were there after Terry and Pat moved into a facility and decided to marry.

“We want to share our love with the rest of the world,” Henschel told OprahMag.com. “I hope that audiences learn to see how true love really works, and how wonderful it is…Terry would be surprised and pleased, and happy to know that it’s happening. She’d say, ‘I’m glad I was a part of this.'”

After Henschel’s own health battle, the two returned home to Canada where Donahuse passed away in March 2019 at the age of 93. Henschel, now 91, spends her time at the casino, frequenting movies and playing bingo, according to the Tribune.

The movie featured the seemingly chilly relationship between Henschel and Bolan’s mother Diana, Donahue’s niece, as well as a heated conversation between the two over money and Donahue’s care. Now the two are closer than ever.

“Now our relationship is very strong. I see Auntie Pat almost every day. We talk a lot about our childhood together. We talk a lot about the things we’ve had to overcome. There’s a lot of parallels there between the two of us. My other aunts are all gone,” Diana Bolan told them. “Auntie Pat’s the only person in the world right now who’s known me my entire life. Like I said, the night Auntie Terry died, I don’t know what I would’ve done if I didn’t have Auntie Pat there, because it was like having a little piece of Auntie Terry in my arms.”

A Secret Love is now streaming on Netflix.