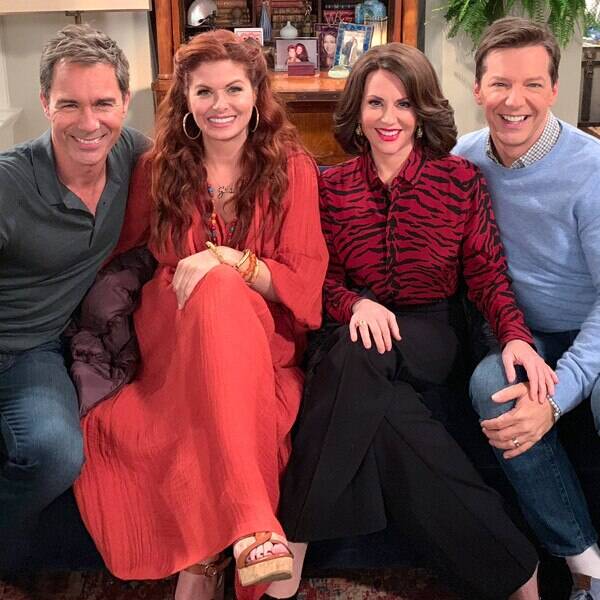 Will and Grace and baby?! The final season of Will & Grace got an early premiere date—it’s taking Sunnyside‘s timeslot as of Thursday, Oct. 24—and with the news, came a brand-new trailer revealing a big bombshell: Grace (Debra Messing) is pregnant.

“Aren’t you a little—” the rider begins.

The trailer features Grace’s big reveal and everybody reacting to it, including Karen (Megan Mullally) joking about Grace fitting into her new baby’s clothing.

“What an amazing mom you’re going to be,” Will (Eric McCormack) tells Grace. “By the time this baby’s my age I’ll be, well, I’ll be dead.”

Last season, Grace dated Noah (David Schwimmer), but in the finale she struggled with the relationship and met Marcus (Veep star Reid Scott) and hit things off with him.

The new season will feature guest stars including Demi Lovato in a recurring role, Gus Kenworthy, Ryan Phillippe, Billie Lourd (who will play the granddaughter of her real grandma, the late Debbie Reynolds), Matt Bomer and Joel McHale. Ahead of the premiere, NBC announced the third revival season—the show’s 11th overall—would be its last.

Creators Max Mutchnick and David Kohan said they made the decision to wrap up with the cast.

“We think of the Will & Grace reboot episodes the way Karen Walker thinks of martinis – 51 is not enough, 53 is too many. That is why, after consulting with the cast, we all have decided this will be the final season of Will & Grace,” Mutchnick, Kohan and director and executive producer James Burrows said in a statement.

“In 2016, Bob Greenblatt came to us with the idea of doing a 10-episode reboot of Will & Grace. They say you can’t go home again, but we did. And now, three seasons and 52 episodes later, we’re even more proud of something we never thought we’d get a chance to do again. We have had a once-in-a-lifetime experience twice. And for that, we owe a double debt of gratitude to NBC, this show’s supportive and caring home since day one,” the statement continued. “It’s been the highlight of our careers to write for and direct four incredible artists who we consider to be the finest and funniest ensemble sitcom cast of all time—Eric McCormack, Debra Messing, Megan Mullally, and Sean Hayes.

“Of course, actors as brilliant as these four are only as good as the words they’re given. The Will & Grace writing room has been a dream team that has consistently lifted the show to heights we never could have achieved on our own with their collective humor, warmth, and humanity,” the trio said. “The hardest part about making this decision is saying goodbye to our outstanding production team and crew who, over two decades, brought passion and artistry to every department. If we had just one more season, we would have learned their names. So, thank you Handlebar Mustache, Cheese Lady, and Cargo Shorts #1 – #12. We will always think of you as family.

“And finally, our deepest gratitude goes to each and every Will & Grace fan across the world. It was a privilege to make you laugh,” the statement concluded.