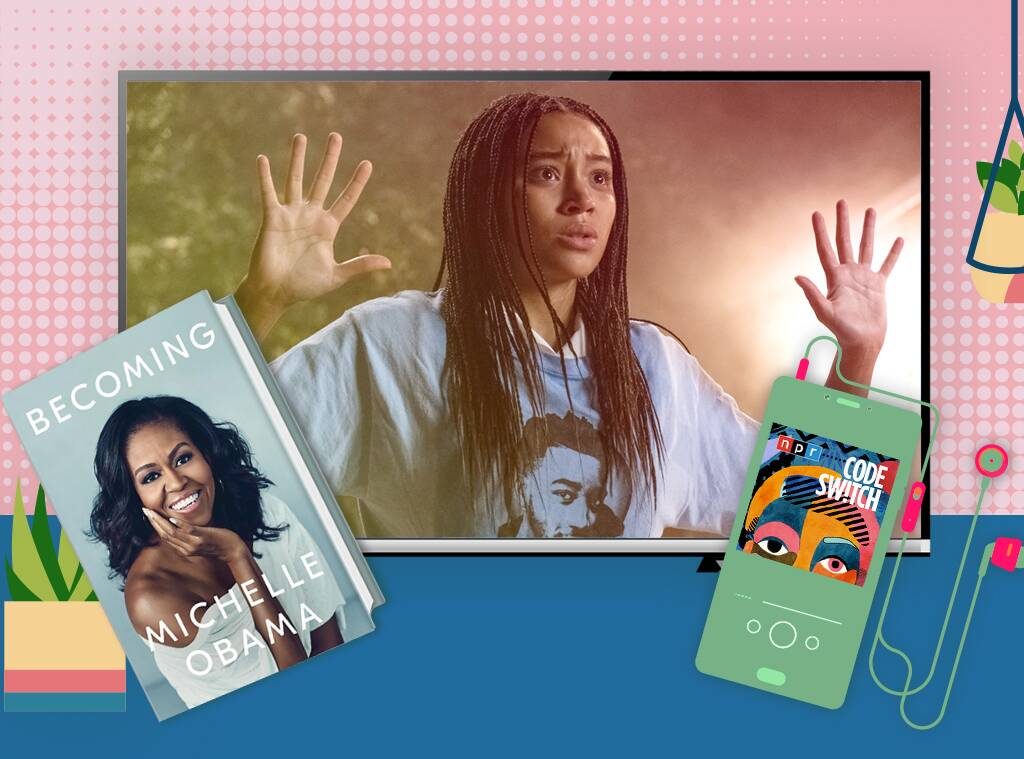 As citizens continues to mourn the death of George Floyd and protests supporting the Black Lives Matter continue around the world, many are turning to art, whether it be music, movies or books, as a source of information and comfort. But it’s important to continue to seek out and support the voices of black creators, to read, to watch, to listen and to engage with their experiences and points of view.

We’ve put together a list of 35 pieces of artwork—ranging from movies to documentaries, from podcasts to memoirs—should you find yourself in need of something educational in the form of an award-winning miniseries, something inspirational, like a memoir from the former first lady, or just in need of a bit of a break courtesy of a really good romantic novel…

When They See Us (Netflix): Ava DuVernay’s Emmy-winning four-part miniseries depicts the wrongful conviction (and eventual exoneration in 2002) of a handful of teenage boys known as the Central Park Five (Kevin Richardson, 14; Raymond Santana, 14; Antron McCray, 15; Yusef Salaam, 15; and Korey Wis, 16), after the assault and rape of white woman in 1989.

Dear White People (Netflix): Based on the 2014 movie of the same name, the series centers on students at an Ivy League school and dives into racial inequality and struggles that are ingrained in elite institutions. The fourth and final season is slated to debut later this year. 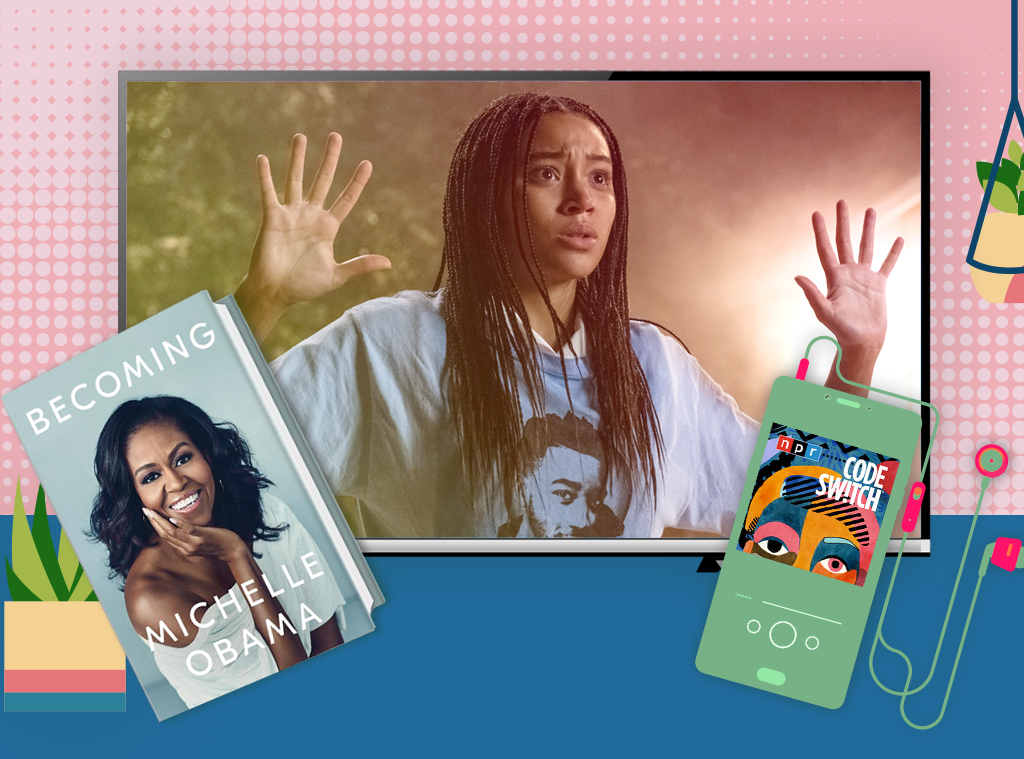 Queen Sugar (Hulu): Created by Ava DuVernay and produced by Oprah Winfrey, the drama based on the novel of the same name follows the estranged Bordelon siblings in rural Louisiana as they tackle family issues, love, racial injustices and more.

Pose (FX and Hulu): Set in the late ’80s (season one) and early ’90s (season two), the groundbreaking series dives into the ball culture world, starring a diverse cast of transgender actors, including MJ Rodriguez, Inya Moore, Dominique Jackson, Angelica Ross and Hailie Sahar. In 2019, star Billy Porter made history when he was the first openly gay African-American man to be nominated or win in the Lead Actor in a Drama Series category at the Emmys. 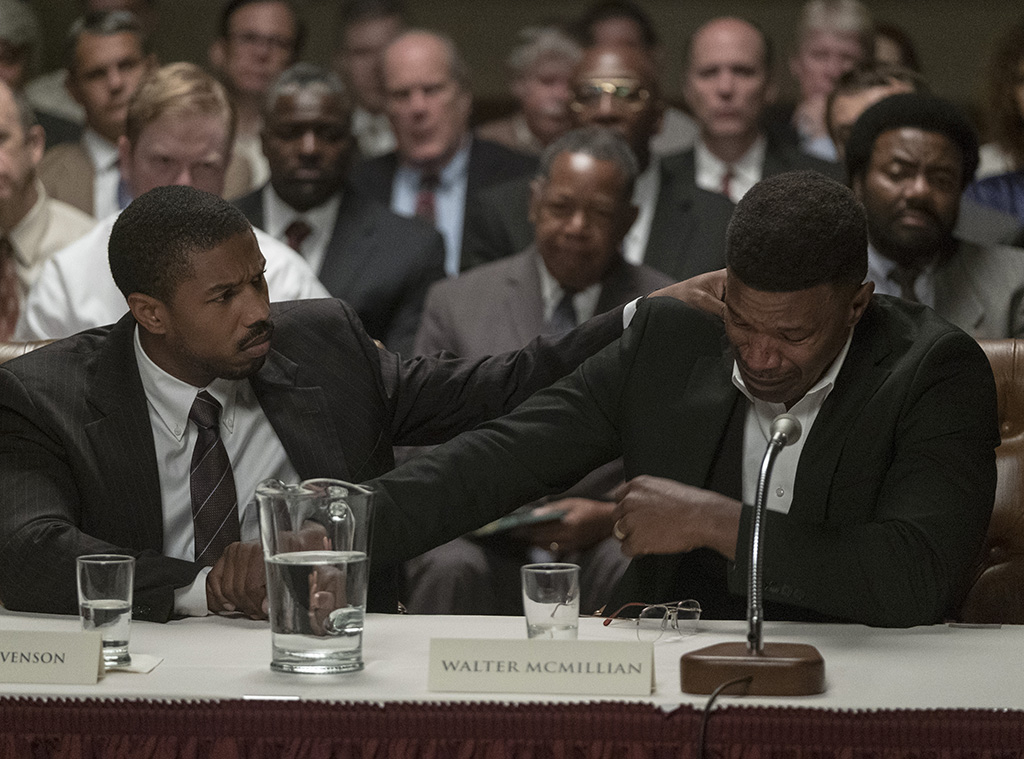 Just Mercy (free to watch during the month of June on Amazon Prime Video): Starring Michael B. Jordan and Jamie Foxx, this tells the true story of Walter McMillian (a stunning performance from Foxx), who appeals his murder conviction with the help of his lawyer, Bryan Stevenson (Jordan).

The Hate U Give (Hulu): The adaptation of Angie Thomas’ bestselling novel stars a tremendous Amandla Stenberg as Starr, one of the few black students at her high school who finds herself at the center of a national controversy when she witnesses a police officer shoot her friend. A blend of coming-of-age with social commentary, The Hate U Give features many standout performances, especially Russell Hornsby‘s gripping turn as Maverick, Starr’s father.

If Beale Street Could Talk (Hulu): Directed by Barry Jenkins and based on James Baldwin’s 1974 novel, the film follows KiKi Layne‘s character as she attempts to clear her love’s (Stephan James) name after he is wrongfully convicted of raping a white woman. Jenkins’ highly anticipated follow-up to Moonlight, Beale Street was one of the most devastatingly gorgeous films of 2018, with Regina King earning the Oscar for Best Supporting Actress.

Love & Basketball (available for purchas on iTunes, Amazon Prime Video and YouTube): One of the most beloved romantic dramas of all-time, this gem starring Sanaa Lathan and Omar Epps is still just as sexy 20 years later, telling the story of neighbors pursuing their respective careers as professional basketball players while trying not to fall for each other.

Fruitvale Station (Tubi): In his directorial debut, Ryan Coogler tells the heartbreaking true story of Oscar Grant (played by Michael B. Jordan in a breakthrough performance), a 22-year-old black man who was shot by white police officers in Oakland in 2009.

American Son (Netflix): Based on the acclaimed Broadway play of the same name, the searing 2019 drama stars Kerry Washington as a woman grappling with systemic racism within the police force after her 18-year-old son goes missing.

“It makes me so happy that people are watching #AmericanSon on @netflix to deepen their compassion and understanding,” Washington, who also starred on Broadway in the play, wrote on Instagram. “My dream for this film was to spark conversations that would lead to change.”

13th (Netflix): We recommend putting this at the top of your list, with Ava DuVernay’s Oscar-nominated 2016 documentary focusing on the intersection between race and mass incarceration in the United States, with the title referring to the 13th amendment.

I Am Not Your Negro (Amazon Prime Video): Narrated by Samuel L. Jackson and based on James Baldwin’s unfinished manuscript that detailed his relationships with assassinated civil rights leaders Medgar Evers, Malcolm X and Martin Luther King, Jr., this 2016 documentary was nominated for an Oscar.

1619: From The New York Times, this five-part series looks at the irrevocable impact of a moment over 400 years ago in August of 1619, when a ship carrying enslaved Africans arrived in Virginia.

Pod Save the People: Released every Tuesday, activist DeRay McKesson will help you better understand the issues going in the news, culture, politics and more, through interviews with experts, leaders and activists.

Scam Goddess: 2019 may have been the official year of the scammer, but Laci Mosley has kept the trend alive and thriving with her hilarious podcast that dives deep into stories of scamming and fraud.

The Read: Hosted by Kid Fury and Crissle West, this weekly pop culture podcast will not leave you crying over spilled tea…unless you are crying from laughing so hard.

Balanced Black Girl: In her bi-weekly podcast, blogger Les Alfred talks about self-care and healthy living through the perspective of a black woman and interviews with black wellness experts.

The Deliberation: Love MTV’s The Challenge? You’ll find this new recap podcast hosted by Rae Sanni and Jacquis Neal just as entertaining as the actual show.

White Fragility by Robin DiAngelo: Feeling overwhelmed and don’t know where to start? Here’s your answer. Examining why it’s hard for white people to talk about racism using her insight gained over decades of running racial awareness workshops, DiAngelo also explains why it’s essential for them to do so.

How to Be Anti-Racist by Ibram X. Kendi: Being against racism is no longer enough, you have to be actively anti-racist, according to Kendi’s award-winning book that lays out the various forms and consequences of racism and how to address them, both internally and externally.

Why I’m No Longer Talking To White People About Race by Reni Eddo-Lodge: If the title makes you uncomfortable, that’s the point. Eddo-Loge’s debut is based on her blog post of the same title about the frustrations of talking about race and racism that went viral in 2014.

Bad Feminist by Roxanne Gay: One of the defining voices of her generation, Gay’s book of essays tackles feminism, politics and culture will make you laugh, cry, laugh, cry and then laugh again.

Becoming by Michelle Obama: May we suggest a double-feature with 2019’s best-selling book and her recent Netflix documentary? Deeply personal, Obama intimately details her upbringing, how she found her voice and her time in the White House for readers, revealing her disappointments and triumphs every step of the way.

We’re Going to Need More Wine: Stories That Are Funny, Complicated, and True by Gabrielle Union: Forget a glass and just grab a bottle of vino as you devour this raw and insightful memoir from the Hollywood star. Holding nothing back in her essays, Union details losing her virginity, opens up about miscarriages and reveals she was sexually assaulted at gunpoint as a teenager.

James Baldwin: The Last Interview and Other Conversations by James Baldwin: There’s a reason his work has shown up in this article several times, and this book, which includes the last uncensored interview with the novelist and activist as well as several other interviews with him throughout his career, is essential reading.

Between the World and Me by Ta-Nehisi Coates: A New York Times‘ No. 1 bestseller and one of the defining books of the decade, the celebrated essayist writes a novel-length letter to his son (as well as to the readers) about our nation’s long history with racism through the lens of his own experiences.

The Wedding Date by Jasmine Guillory: Love the rom-com trope of a fake relationship slowly developing into a real one? Dig right in.

An American Marriage by Tayari Jones: An Oprah’s Book Club pick and the 2019 Women’s Prize for Fiction, this engrossing novel documents the relationship of Roy and Celestial, a black couple in Atlanta whose lives are shattered when he is convicted of a rape he didn’t commit.

Such a Fun Age by Kiley Reid: One of the most buzzworthy new releases of the year, Such a Fun Age follows the tale of Alix, a feminist blogger, and her employee Emira, after Emira apprehended for “kidnapping” the white child she was actually babysitting.

The Vanishing Half and The Mothers by Brit Bennett: Her debut novel, The Mothers (young love, big secrets and a small town all come crashing together) became one of the most successful books of 2016, and her latest, The Vanishing Half, is dare we say even better. A multi-general family saga, the novel takes place over the course of 40 years, following twin sisters and their racial identities.

You Should See Me in a Crown by Leah Johnson: In her debut novel, Johnson tells the story of Liz Lightly, who has been waiting to leave her white (prom-obsessed) midwestern town. But when her funds for college fall through, she sets out to win the title of prom queen for the scholarship that comes with it, even if it means going up against the girl she has feelings for. We’re already counting down until we see the movie adaptation of this YA novel.

Action 7: Processing The House Papers Accompanied By A Legal Check

How Execute This Guide is normally been refined with people Style? Zillow Assistance Center