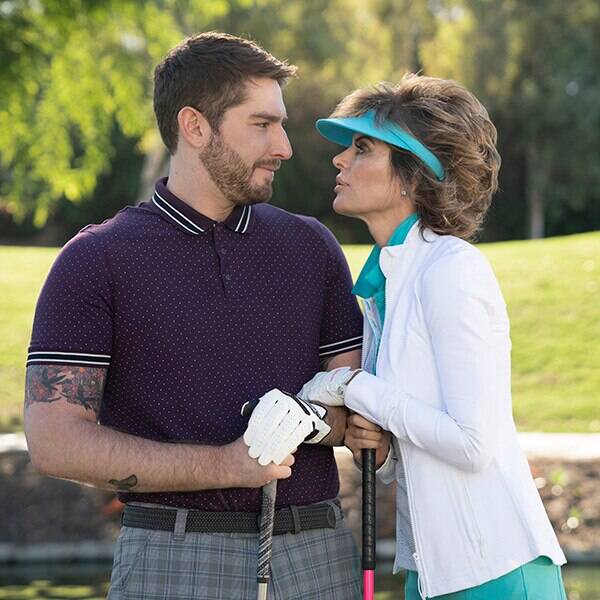 Lisa Rinna‘s got some advice for any future housewives or househusbands: learn to play golf.

The Real Housewives of Beverly Hills star and former star of Days of Our Lives is guest starring on tonight’s episode of Sundance TV’s This Close, and she’s ready to take her son-in-law under her wing…with a few nods to Rinna’s real-life past, and we’ve got your exclusive sneak peek above!

Rinna plays Priscilla, described as “a former soap-opera-actress-turned-trophy-wife” who’s “great to have at parties, and she’s never met anyone whom she couldn’t have a conversation with.”

“You know, I used to be exactly like you. I married a much wealthier man, I stopped acting, I said goodbye to Days of Our Lives, and I said hello to martinis and golf!” she tells Michael.

This Close is the first TV show written, created, and produced by deaf actors, and chronicles Kate (Shoshannah Stern) and Michael navigating life in Los Angeles in their 20s.

Tonight’s episode (the first of two) is called “Three’s Company” and finds Kate trying to stay out of the way by throwing herself into work after moving into Ryan’s guest house. Michael is offered a deal that will get him out of his publishing debt, but worries it’s too good to be true. He helps Ryan break the news to Ryan’s mother, who is less than thrilled about her new son-in-law.

The second episode of the night, called “Wait Until Dark,” finds Kate joining the newlyweds on a family camping trip, which goes awry in multiple ways. Secrets start spilling, and someone gets lost in the night!

This Close airs at 9 p.m. PT/midnight ET on Sundance TV.