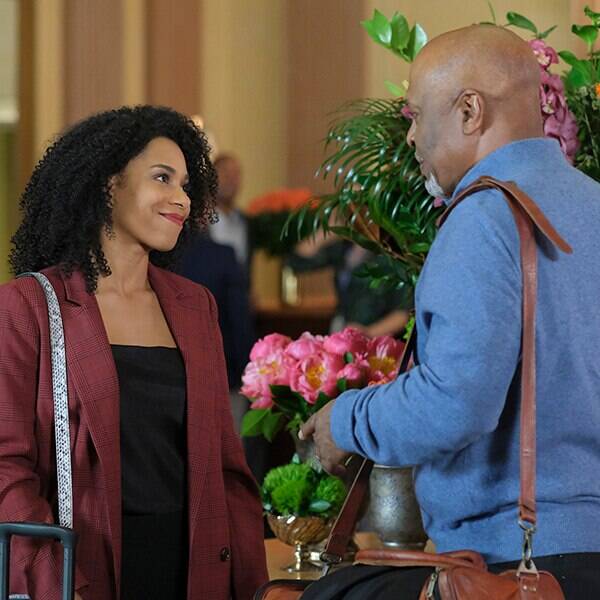 Way to rip our hearts out in multiple ways over the course of one episode, Grey’s Anatomy.

Tonight, we took a break from Grey Sloan Memorial to visit a medial conference with just Teddy, Hayes, Maggie, and Richard, and it was an unexpected trip for each one of those people in very, very different ways. We’ll start with the mostly good one: Maggie found a very hot guy.

She reunited with an old colleague of hers from college, and it turns out they’re literally perfect for each other and they really like having sex with each other. The only problem is that he lives in Boston, and he has now invited her to come to Boston with him, but she’s Maggie, so she’s gotta make some spreadsheets about it first. She didn’t give him an answer just yet, but based on what then happened at the very end of the episode, she likely won’t be going to Boston any time soon. But we’ll get to that.

Teddy also ran into an old friend, but it was an old roommate named Claire. Teddy and Claire were roommates with a woman named Allison (AKA the name of Teddy’s daughter), who was officially dating Claire but secretly in love with Teddy. Allison worked in the World Trade Center and was killed on 9/11, and Claire and Teddy basically hadn’t spoken since.

There was some animosity there at first as Claire revealed she had checked Allison’s phone records and saw the last person she called was Teddy, but in the end, they were both just glad they had both loved Allison, which was nice.

Hayes ended up reliving the death of his wife, who he once met at one of these medical conferences. She went in for a hysterectomy due to a fibroid and ended up with cancer that killed her, and Hayes just so happened to run into a guy at the conference still trying to sell the same device that killed her. He somehow didn’t just straight up punch the guy, but he did get very angry when the man tried to buy him a drink.

And then there’s Richard, who was supposed to be presenting his PATH pen in front of some of the world’s top medical experts. But as he was preparing his presentation, he got a visit from Catherine, who apologized for everything she had done and helped him come up with a whole new idea. Except Catherine wasn’t really there, and he was just talking to a hallucination the whole time. He then got up on stage and presented gibberish to not only the room, but to the livestream, which Catherine was watching from Grey Sloan.

Maggie managed to interrupt the presentation and call an ambulance, suggesting that he was having a stroke, and Richard came to on a gurney, wondering what was going on. Maggie said she didn’t know, and gave a look to her new friend like yeah, I’m not going to Boston.

Richard’s hand tremor has been troubling for quite a while, especially paired with the fact that he wasn’t telling anyone about it, and we gotta say we’re just not ready to watch Richard get sick. We aren’t joking when we say we had to pause the show and then skip ahead during that presentation. This is not the time!

That said, we’re going to need next week’s episode stat.