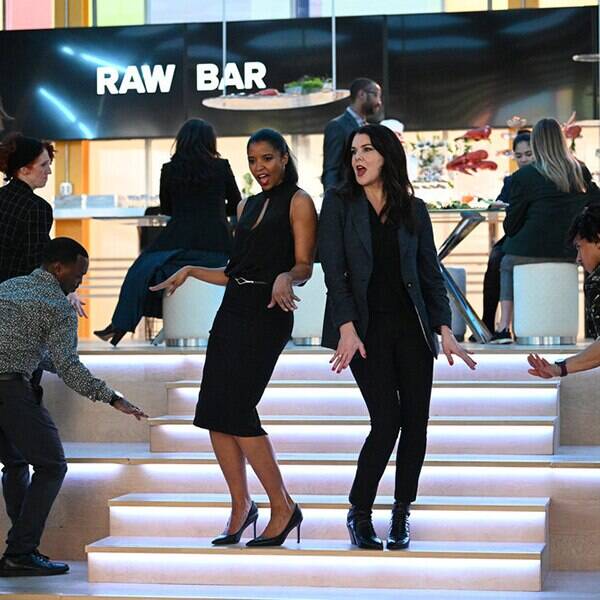 In this Sunday’s episode of Zoey’s Extraordinary Playlist, a battle ensues over Max (Skylar Astin), who has abandoned the fourth floor for the sixth floor and now possesses important information that both his former boss (Lauren Graham) and his new boss (Renee Elise Goldsberry) want. That leads to one hell of a showdown between the two women, who fight over him via musical number with Brandy and Monica’s “The Boy Is Mine.” Does that feel slightly inappropriate when the “boy” is a fully grown employee? Maybe! Do we care? No.

E! News has your exclusive first look at the scene, in which Zoey (Jane Levy) seems to be having a really, really good time. We’d also like to commend Graham for holding her own against a Broadway musical superstar like Goldsberry, who was in the original cast of Hamilton!

Sunday’s episode, called “Zoey’s Extraordinary Outburst” is not just about the war between the fourth and sixth floors. Zoey finds herself struggling with all of her friends, including Max, Simon, Mo, and even her dad’s caregiver Howie, after everything that’s gone down over the past few weeks (like when she sang her romantic feelings out loud to both Max and Simon) and in the midst of her father’s illness getting worse.

But you can rest easy knowing there’s a delightful dance party coming as well as several extremely good musical numbers (as usual), so be sure to tune in on Sunday night.