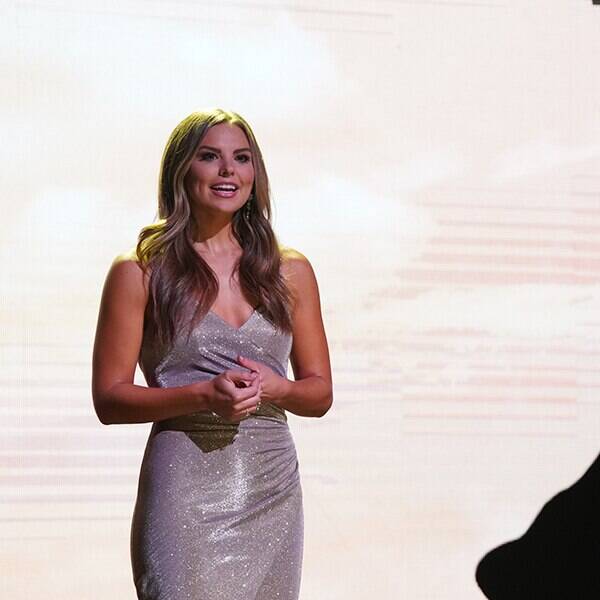 The Bachelor just premiered with Peter Weber at the helm, the first season since, you could argue, Colton Underwood and Hannah Brown upended the franchise in their own unique ways. Colton hopped a fence to escape production, giving us one of the most anticipated, most satisfying, and most athletically impressive moments in franchise history. Hannah failed in every possible way, ending up with two full losers in her final four, briefly engaged to a liar, emerging single but more popular than any star before her.

We all knew Hannah Brown was appearing in tonight’s episode, so when it first appeared that her entire conversation with Peter entailed giving him back the wings he gave her on The Bachelorette, and telling him she hoped the best for him, it was a bit of a letdown. That was the conversation that would give them closure? But boy, we did not see the extent of what was coming.

After a full episode of limo arrivals and two full other dates (more on those in a moment), a group of the women were invited on a date that only promised to be awkward. They immediately assumed it was sex ed, which was pretty much correct, except it’s even more awkward than that, because it was actually sort of a storytelling class about a sexual experience, starting with Peter and the Windmill.

After telling the story of her four-time night with Peter in the windmill, Hannah explained that the women needed to be confident in their sexuality in a relationship, so to demonstrate that, they were going to to retell a story of a past sexual experience in front of a live audience.

Some of the women were like, huh, this woman keeps showing up here a lot, and then we cut to Hannah, standing behind the on-stage windmill with a producer, expressing how much she cares about Peter.

“I loved him, but I know sometimes it doesn’t work,” she said, heading backstage to cry. (Also, it was her birthday on the day of this date, just to add another element to this whole thing.)

Peter went to comfort her, telling her she killed it with the story. (“Just like I remembered it.”)

He then told her that a part of him hoped she wasn’t just there to drop something off during the limo arrivals, but he knew he didn’t need that. Then they started talking about that day in Greece when she sent him home, with Hannah’s face so covered in smeared makeup you have to know this was not staged, because no person would be willing to be on TV looking like she was looking. And yes we have transcribed their entire conversation, as if we’ve got nothing better to do.

Peter: “I know you asked Tyler out after your last episode, but did it ever cross your mind to ever ask me instead for that, or…if not, it’s fine, I haven’t asked you that, but it’s been on my mind for a long time…”

Hannah: “There was still something when I saw you at [After the Final Rose], I felt like.”

Peter: “I’m just being very honest with you. Watching that episode that night live and seeing that happen, it was just like OK, for me, that’s kind of, like that’s it. I don’t want to be someone’s third option at all. And then it was just tough, because I found out you had moved 20 minutes from where I live, and just all this stuff kept happening, and I don’t know. I feel like I thought that I was not confused, but now I don’t know. What the f–k am I doing right now? I don’t know what I’m doing…This is so insane, but what would you say if I asked you to come be part of the house?”

Peter: “Do you regret sending me home at all in Crete?

Hannah: “Yeah Peter, I question it all the time.”

Peter: “I felt zero doubt. Even when you said Jed’s name first, so sure that you were calling my name. And then obviously you didn’t. But that morning, was there still something…”

Hannah: “I told you, I had no doubts that you were going to be…it was you and Jed.”

Peter: “You never told me that.”

Hannah: “I don’t think I wanted to change my mind about Jed. It was comfortable, it was falling back into the same thing, but I’ve broke everybody’s heart, and my own, through this experience.”

Peter: “I swear to you, I remember I was at my aunt’s house watching that live last episode, and I was telling my parents, if she wants to try this again, I am 100% on board. And my heart just sank when you like asked Tyler out. And I love Tyler and it’s nothing against him, but I was just like…ugh. That hurts.”

Hannah: “Well he was like reaching out, and you didn’t say anything. I didn’t know where you were. I knew you were upset and dealing with it, so I didn’t reach out to you. And you didn’t reach out to me. I didn’t know if you just wanted to get past it, wanted to be the Bachelor…I mean, I thought you wanted to be the Bachelor. And I walked out there and when I saw you, I felt a lot more than I thought I was going to. I didn’t think it would be that much spark, because I know there’s still something there.”

Peter: “What do you want? I’m so confused right now, because I know I shouldn’t feel that way, but I did kind of want you to come back in. I remember I saw you that first night and I remember saying like, wow, didn’t even know it was you, I swear to God. And then you come out and then I realized who it was, and I don’t know what to do right now. I’m so confused, and this is the first week this whole thing has started. And I’m obviously not 100% where I thought I was. I don’t know what to do. I can’t help how my heart feels.”

And then we got Peter, in a solo interview.

“I look at her, and I just don’t want to stop looking at her. And I want to just kiss her and just…just like have had all this work out. And it didn’t, and I know it didn’t. And I just, I feel like such a jerk because I have such an awesome group of girls here expecting to meet someone that was truly ready to have this work for them as well, and I don’t know.”

Jaw on the floor, honestly. After all those promos featuring Hannah’s return, we thought sure they were teasing us with something that was nowhere near as dramatic as it actually was. We were incredibly wrong, and we gotta say, we wouldn’t be that mad if Hannah and Peter lived happily ever after and the season ended with the next episode. But alas, that does not appear to be the case.

Elsewhere tonight, a group of women went on one of our favorite dates of the franchise when they went to flight school, taught by a couple of badass lady pilots. They made them do math (multiple women thought a mile is 30,000 feet!) and taught them all the dirtiest words that are also flight terms, and gave them various tasks to complete, including changing into their pilot uniforms in a Porta Potty.

The final task was an obstacle course, and Kelley (the girl who had previously met Peter in a hotel) cheated by just flying right through it to the finish line, ignoring the actual course. Peter did not take this cheating into account and took her up in a plane for a bit of alone time. Then, the cocktail party just so happened to be held in the same hotel where they first met, so he didn’t care when she stole time the other girls didn’t already have. She got the rose. So far, not a fan of Peter’s rose choices!

The other date of the night was a one-on-one with Madison, who got to attend the vow renewal of Peter’s parents. It seemed like they had barely spoken before that, so that seemed a bit premature. If we were Peter’s (delightful, incredibly sweet) parents, we would have been like please don’t bring some random girl you just met to our vow renewal, to meet our extremely close family.

Then they got to enjoy one of those super awkward private concerts we love so much, and then we promptly forgot about everything that had just happened and had to go back and rewatch after the whole Hannah situation. Hard to care about any of these new women when the one we already know really well is currently covered in mascara tears.

We’ll have to wait until next week to find out what exactly this means and what happens next, and you can also tune into E!’s Daily Pop tomorrow to see Peter Weber explain himself.

The Bachelor airs Mondays at 8 p.m. on ABC.