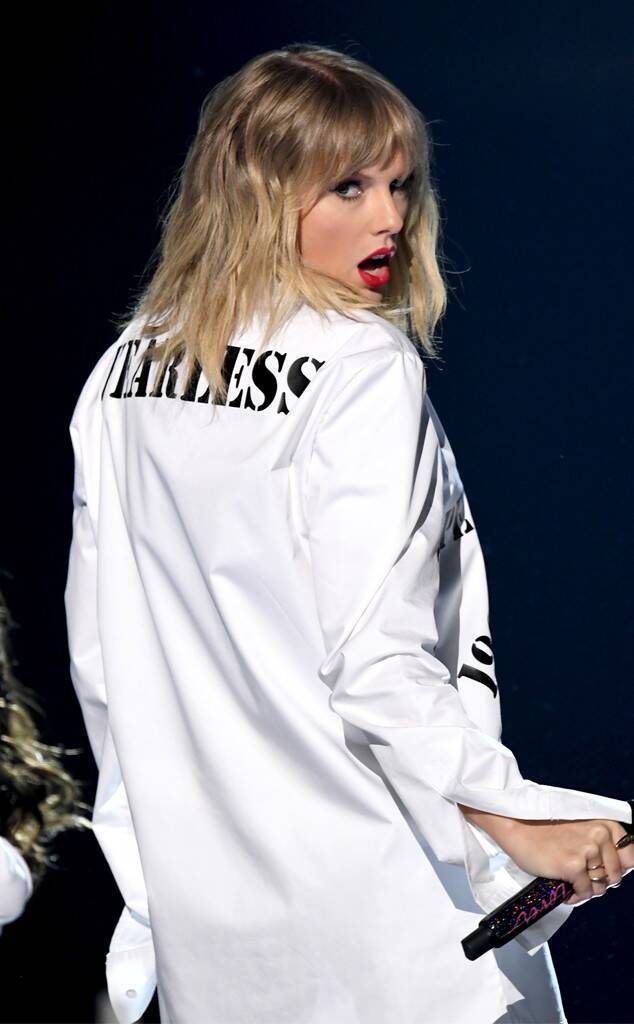 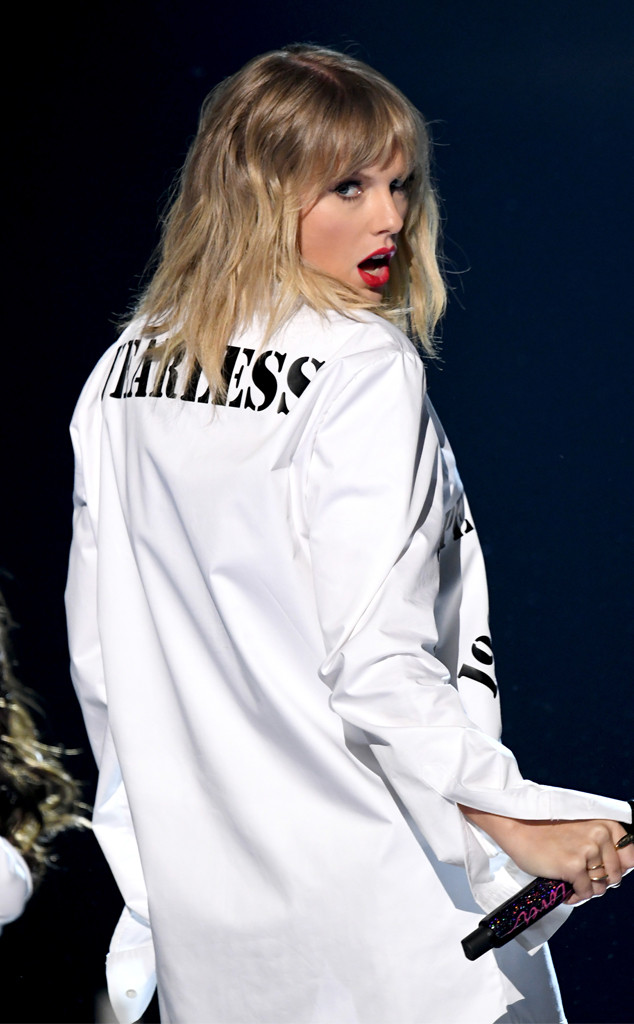 On Sunday night, the superstar singer took to the stage at the Microsoft Theater while being honored as the Artist of the Decade. In celebration, Swift performed a medley of her hit songs, starting off with “The Man.” For the performance, Swift—who has been in the middle of a battle over the rights to her music—wore a shirt with the name of her first six albums on it, sending a moving message with her wardrobe alone.

As Swifties will know, the 29-year-old star took to Tumblr earlier this year to react to the news that record executive scooter braun had acquired Big Machine Records, the label under which Swift released her first six award-winning albums. In her message, Swift—who is now signed with Republic Records and Universal Music Group—said she felt “sad and grossed out” by the move, which was coordinated with her longtime collaborator Scott Borchetta.

“I guess what I’m trying to say is that all any of the artists, or really anyone in this room, wants is to create something that will last,” Swift said in her acceptance speech, presented to her by Carole King. “Whatever it is in life. And the fact that this is an award that celebrates a decade of hard work and of art and of fun and memories, all that matters to me is the memories that I have had with you guys, with you, the fans, over the years.”

“Guys, we’ve had fun, incredible, exhilarating, extraordinary times together,” the songstress continued. “Thank you for being the reason why I am on this stage from the very first day of my career until tonight. I love you with all of my heart. Thank you for everything. Thank you, AMAs. I’m so lucky to get to do this.”

Swift, who made history at the award show, also referenced her “complicated” year in another heartfelt acceptance speech.

“The last year of my life has had some of the most amazing times and also some of the hardest things I’ve gone through in my life and not a lot of them are things that haven’t been public. And I wanted to thank you so much for being the thing that has been a constant in my life. Like, this industry is really weird,” Taylor shared with the audience. “You feel like your stock is either up or down and people either like you or they don’t or you’re feeling bad about yourself. But the people that hang in there for you are the ones that you will never forget.”

In honor of Swift, let’s take a look at all of her 2019 American Music Awards Easter eggs!

T.Swift, who has been in a music battle over her six album masters, began her performance in this shirt with the names of her first six albums written on it in bold print. This is Swift sending the message that these albums are a part of her, she made them, and they will be with her forever. Swift also liked a post on her Tumblr about her shirt statement relating to The Dixie Chicks, who received much scrutiny in the early 2000s, and a documentary based on their controversy called Dixie Chicks: Shut Up and Sing.

As Swift turned, she revealed her album Fearless written on the back of her shirt. T.Swift opened the show by singing “The Man,” in which Swift wonders what her life would be like if she were a man in this industry. “I’d be a fearless leader, I’d be an alpha type,” Swift sings on the track. With this statement, Swift continues to prove she IS a fearless leader.

A Message to Young Girls

During her performance of “The Man,” Swift danced alongside a group of young girls, sending the message that they too can be fearless leaders.

If Swift’s performance ensemble looked familiar to you…

That’s because it resembled one of T.Swift’s beloved Speak Now Tour outfits! And that’s really what she’s doing, speaking up now for what she belives in!

Remember that piano from Swift’s beautiful “Lover” performance? It had her song titles written on it, but this time, in a beautiful script print.

Swift won six awards at the 2019 AMAs, which—as many fans on social media have noted—represent the six album masters that the singer is trying to obtain.