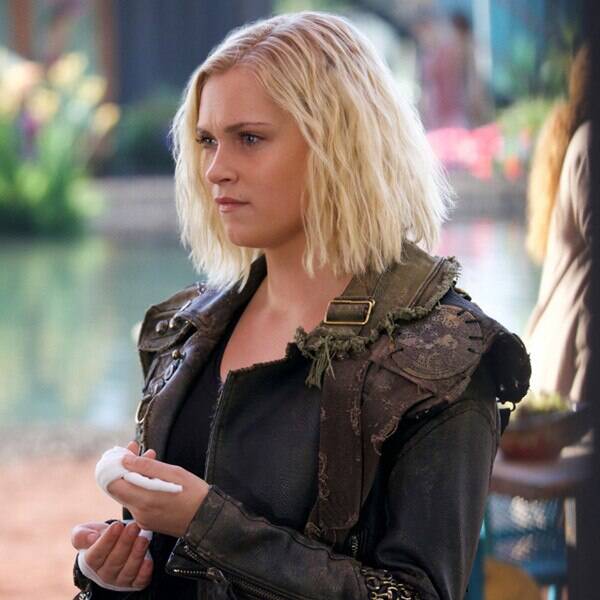 Surprise! Things continue to get even more messed up on The 100.

Clarke’s still seemingly erased, with her body lost to Josephine, and now she’s knocking Bellamy out and has learned that nightbloods can be artificially made. Meanwhile, Octavia and Diyoza have discovered that this planet/moon is all kinds of screwed up, and those temporal flares combined with some crazy quicksand are no joke. It’s a mess, as it always is when these survivors end up anywhere.

And while we’re obviously missing Clarke, Josephine is a barrel of fun, and Josephine pretending to be Clarke is highly entertaining. Bellamy now knows what has happened to Clarke, but unfortunately he’s been paralyzed, so he can’t do anything about it at the moment.

“That was a great thing to shoot,” Eliza Taylor tells us of their confrontation. “It was really cool. It was weird, like with all of the actors actually, because we are so used to emoting and being compassionate with one another as our characters, and I kind of had to switch that off because Josephine doesn’t care about any of these people…I just had to act like I didn’t give a s–t, which was fun.”

Meanwhile, she’s got this new family with whom to be compassionate, but they won’t be a happy little crew for all that much longer.

“It was pretty great actually, but you know, at the same time, there is a lot going on under the surface. I think this happy family unit will definitely face some challenges, and they’re going to have a lot of differences, because Josephine is a force to be reckoned with. I think Russell and Simone might regret what they’ve gotten themselves into by bringing her back.”

For now, she’s got some really valuable information for her little immortal family: nightbloods can be made, and it appears she’s got her eye on Murphy as the next one to be made.

“Like, they’d never have to worry about waiting for a natural nightblood to be born ever again. So it’s a huge plus for the primes,” she teases. “Now they just have to figure out how they did it.”

All of this will soon connect back with the temporal flares that Octavia and Diyoza just lived through, along with the Children of Gabriel, who were thought to be the bad guys but now appear to be fighting against the primes.

“I mean I think it’s pretty clear to say that these two facets of sanctum have to come together at some point, and the way in which they do is wild,” Taylor says. “I can’t spoil anything, but yeah, you’re in for it.”

As for whether we can expect Clarke back any time soon, Taylor could not say, but she could say this:

“You should probably say goodbye to her for now, but there’s no way in hell our heroes are going to let her go without a fight. So I think that the way the writers have written the next few episodes is really cool, and the way they try to bring her back is super cool too.”

So rest assured that Bellamy, Abby, Madi, and the others won’t just let Clarke die, but can’t we all agree that Taylor’s acting as Josephine (and as Josephine as Clarke) is a true treat?

Be sure to check out our interview with Eliza on the acting challenges that presented!