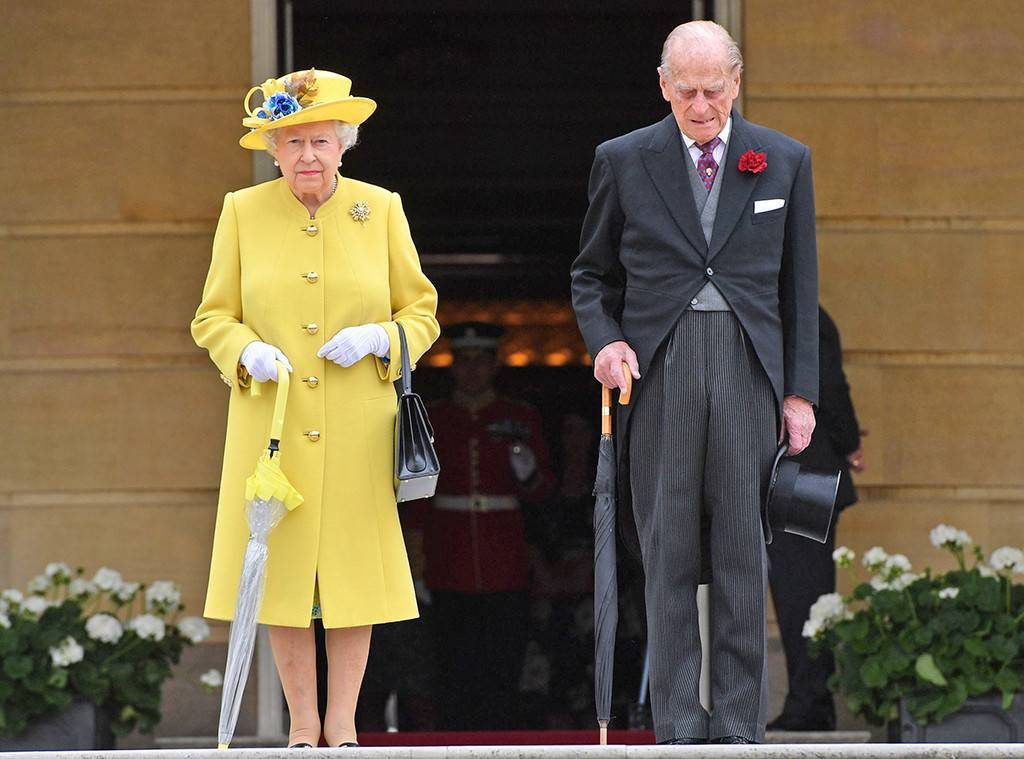 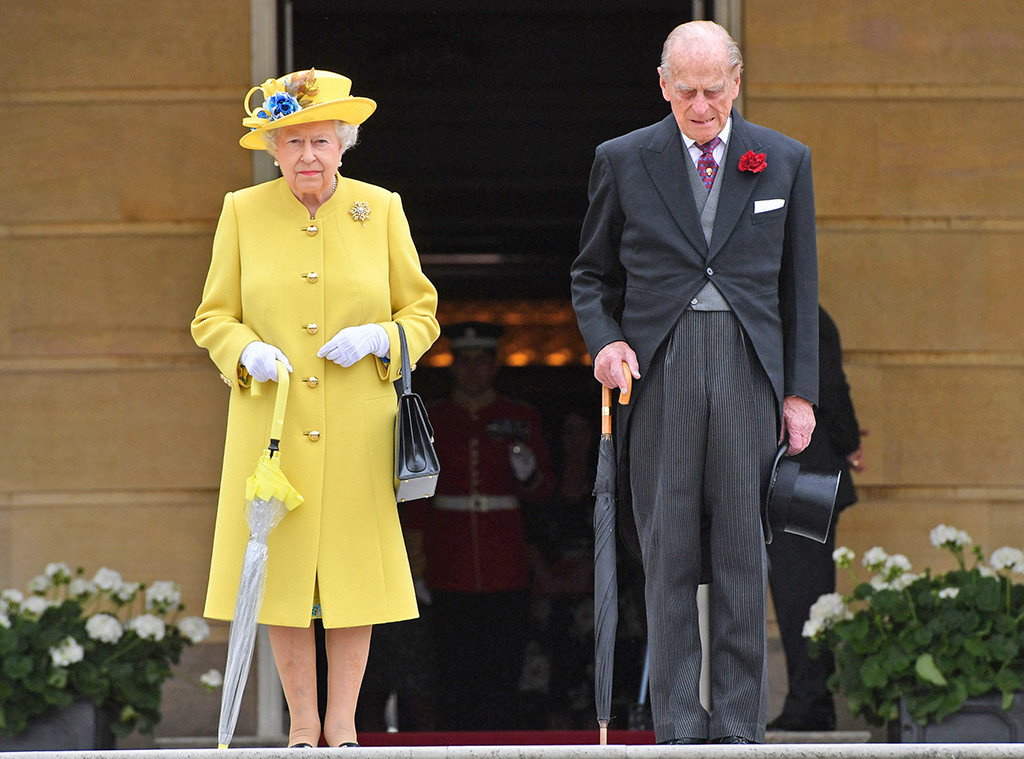 There’s many a term that can be applied to Queen Elizabeth II, the longest-reigning queen regnant of all time, but, perhaps, one of the most interesting descriptors would be: Fascinating study in contrasts.

She owns roughly 200 of her favorite $2,500 Launer purses, a $10 million collection of Rolls-Royces, Bentleys, Land Rovers and a custom Range Rover and some 150,000 works of art, but one of her must-have items is a $9 bottle of Essie nail polish in the ever-so-slightly pink-tinged hue of Ballet Slippers.

She wiled away the years of World War II outside of London at Windsor Castle with younger sister Princess Margaret and rationed fabric coupons to craft her wedding dress and yet is thoroughly modern enough to hang with James Bond, visit the Game of Thrones set, Skype with her many grandchildren and just recently made her first official post on Instagram.

And she is one of the most public figures in the world, yet, the average person knows very little about her, save for the fact that she tends toward coordinated pastel ensembles and is marking her 93rd birthday today.

As one might expect after 67 years on the job, young Lilibet ascending to the throne at 25 little more than four years into her marriage to Prince Philip and already mom to then 3-year-old Prince Charles and 18-month-old Princess Anne, she’s established quite the successful routine.

“The Queen’s life follows the same pattern every year,” former private secretary Sir Kenneth Scott outlined in a 2016 piece for Vanity Fair. Starting with the holiday season, she heads to Sandringham, her country estate in Norfolk, where she hosts the highly regimented three-day Christmas celebration and she’ll generally stay put there through January, noted Scott, “giving shooting parties, holding receptions and dinners for her neighbors and personal friends, and supervising the works of the estate.”

Come February, she heads back to her official royal residence in London, the 775-room Buckingham Palace, making the brief trip out to Windsor Castle for weekends, a week or so surrounding Easter and another week in June to hold court at the annual meeting of the Most Noble Order of the Garter and host what Scott called “a large house party” for the Ascot horse races. 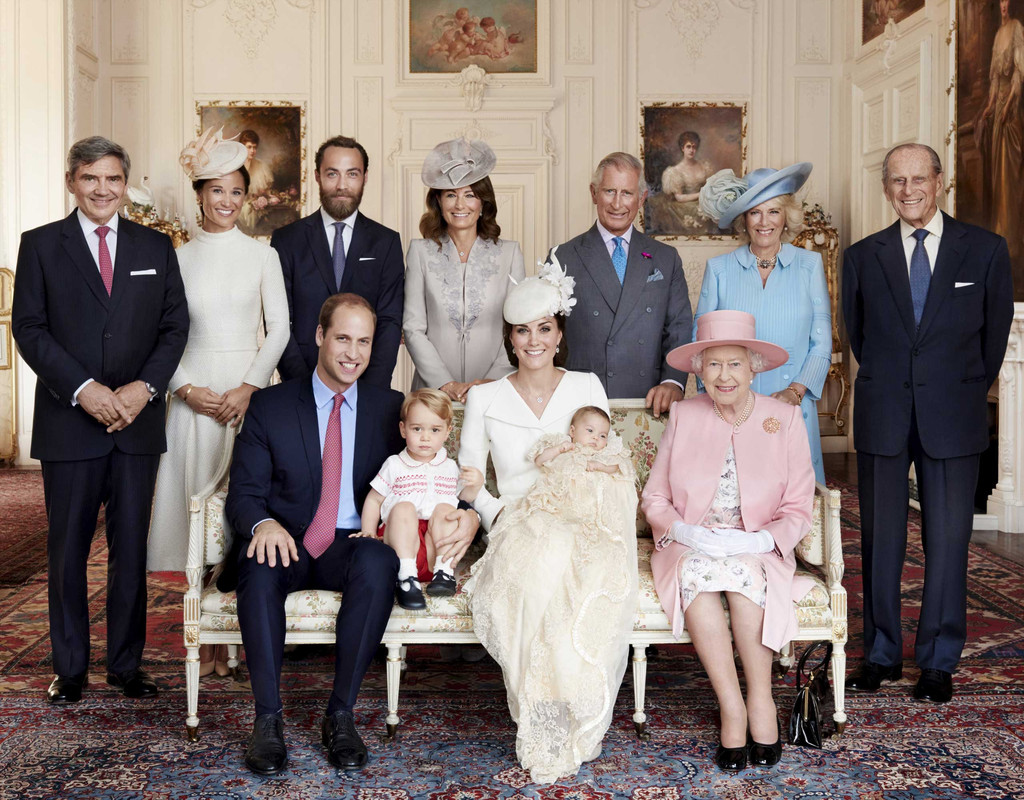 Following a July week at Edinburgh, Scotland’s Hollyroodhouse, formerly a 12-century monastery, it’s back to London until August when it’s time to ship off to her beloved summer estate in Scotland: Balmoral Castle.

Her home through the early weeks of October (until she returns to London ahead of the holidays), the 50,000-acre spread, where she shared her first tea with grandson Prince Harry‘s prospective bride, Meghan Markle, “is where she can be at her most relaxed,” revealed Scott. There, she spends mornings indulging in her favorite hobby, horseback riding, selects one of her many luxury cars to tool around the estate visiting tenants “and even goes into the neighboring town, Ballater, from time to time to do some shopping,” he said, noting that in one shop, a customer approached saying she looked “just like” the Queen “to which Her Majesty replied, ‘How very reassuring!'” 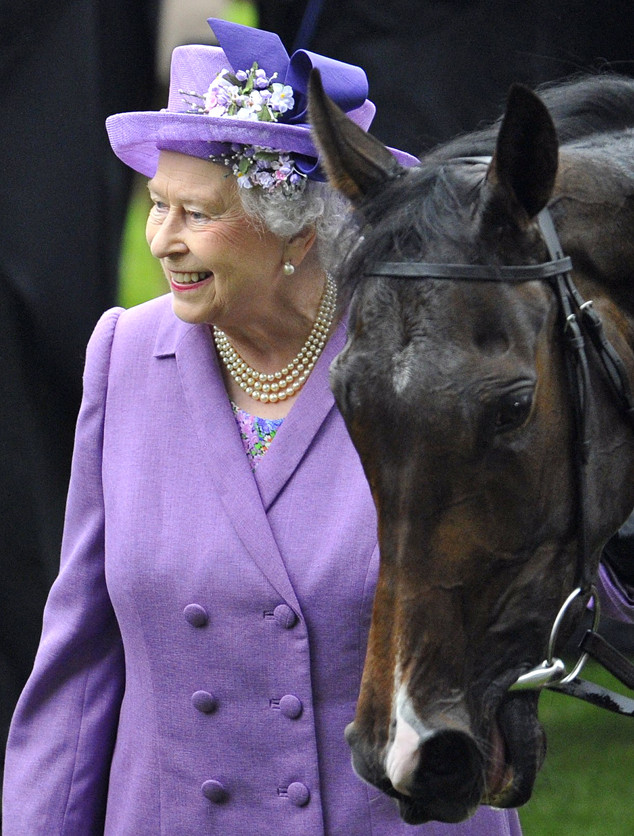 Though Windsor is another treasured getaway, its proximity to London means that her official duties accompany her there and she will often hold meetings of the Privy Council or invite select distinguished guests for a meal, a visit to the Royal Library and a sleepover, an evening dubbed a “dine and sleep.”

And no matter which of her six residences she chooses to lay her crown, the daily routine follows a general pattern. While at Buckingham or Balmoral, she’s roused awake at 9 a.m. by a royal bagpiper, tasked with playing outside her window for 15 minutes. Over breakfast (generally Special K cereal with fruit, onetime chef Darren McGrady told The Telegraph, but, on special occasions, scrambled eggs with smoke salmon and a grating of truffle) she’ll page through the newspapers and the roughly 300 letters she receives on the daily.

“She obviously cannot respond to all of the letters, but she takes a sample, reads them, and writes a note about how she would like them replied to,” said Scott. “Personal friends put a special mark on the envelope of their letters so that they can be extracted from the pile.”

The rest of the afternoon is devoted to meetings with senior staffers. Among the rotation: the Lord Chamberlain, who oversees the household, the Keeper of the Privy Purse tasked with finances, the comptroller of the Lord Chamberlain’s Office (they organize all state occasions), the Crown Equerry, who sees to transportation and, of course, her three private secretaries. Their tasks, said Scott, include arranging her agenda, dealing with the massive intake of letters and “acting as a link to government departments.”

In the lead up to lunch (accompanied by a snifter of gin and Dubonnet with a slice of lemon and a lot of ice, plus a glass of wine), she will host a series of receptions with the types of people who have risen to a high enough station to earn a meeting with the Queen, everyone from High Court judges, British ambassadors and heads of charity organizations for which she serves as patron.

Thanks to what Scott calls “an extraordinary internal body clock” each conversation is held to a precise 20 minutes. 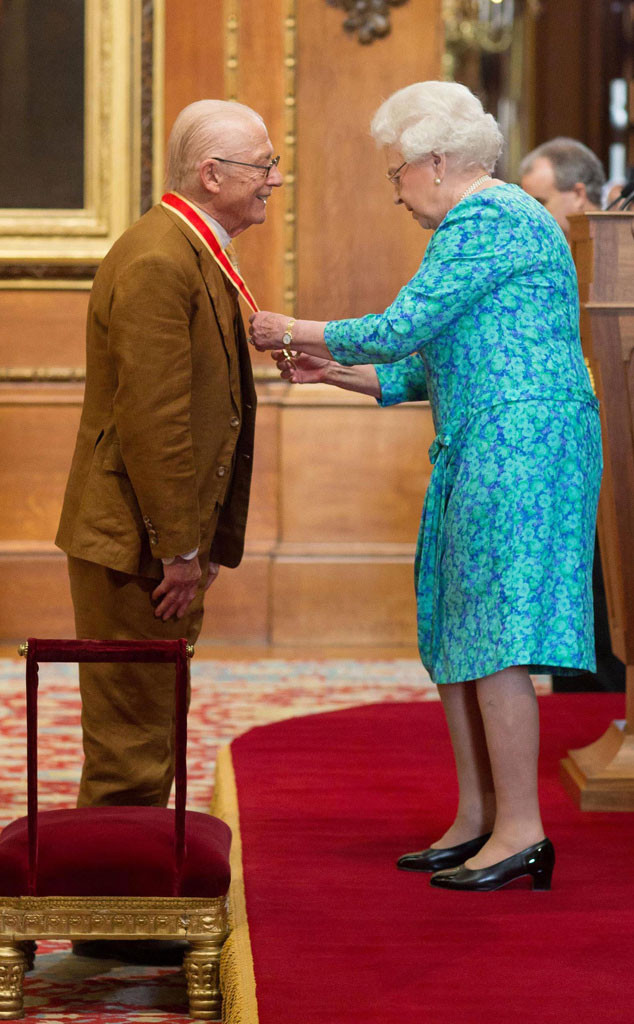 And should aides not heed her signals that it’s time to wrap, the Queen is said to use her ever-present handbag (reportedly stocked with lipstick, tissues, reading glasses, lozenges and a fountain pen, yet no money unless she needs a bill for the church collection plate) as a guide—should she place it on the table, it’s a five minute warning; if it moves to the floor, they are to rescue her at once.

But more often than not, the Queen is adept at bringing conversations to an end all on her own within the set time frame.

“My first experience of this gift was when I was in the British Embassy in Washington during the bicentennial state visit, in 1976. I was in attendance when all the heads of diplomatic missions were presented to her, and after the last one had gone, her private secretary whispered that she had 12 minutes before she had to leave for the next engagement,” Scott recalled to Vanity Fair. “She turned to me and said, ‘Shall we plunge in?,’ and I then escorted her down the garden to talk to a few of the ambassadors. After exactly 12 minutes she said good-bye and moved on.” 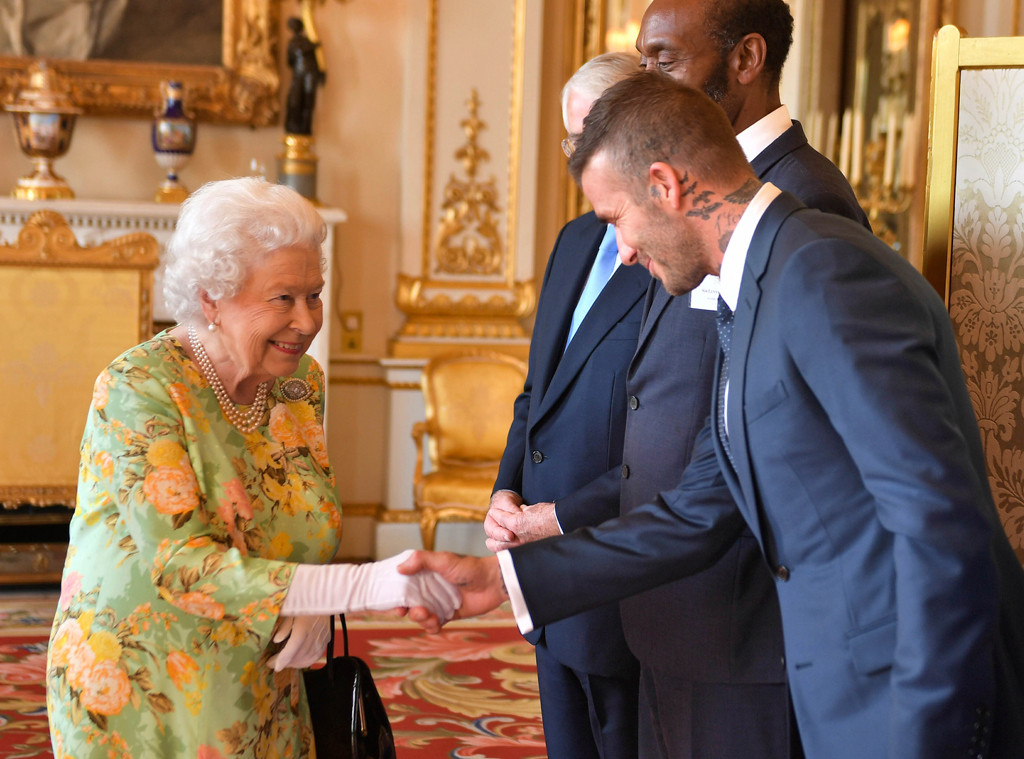 From time to time, continued Scott, she may have a morning appointment that involved her bestowing awards on those deemed deserving by the government (“She particularly enjoys this because she meets people from every walk of life; I remember her saying with delight afterward that she had met a fascinating man who bred racing pigeons,”) or an afternoon spent posing for a portrait, having sat for more than 129 over the course of her reign.

And, of course, there are the various engagements she still sees to after seven decades on the job. Last year saw her reporting for duty at 293 events, a number that trailed only her children, Charles, Anne, Prince Edward and Prince Andrew. (By contrast, Prince William turned up at just 220 engagements; 27 more than Harry.)

Early evenings are reserved for tea (thanks to a sweet tooth, McCrady said she quite enjoys a slice of chocolate perfection pie or chocolate biscuit cake, made with McVitie’s Rich Tea biscuits), various receptions or, in the summer, an outdoor garden party.

She might also have dinner with family or friends, but, if left to her own devices, she’ll opt for a sensible starch-less meal of grilled sole, vegetables and salad. “Sadly, the Queen is not a foodie,” McCrady told The Telegraph. “She eats to live, unlike Prince Philip who loves to eat and would stand and talk food all day.”

Though her majesty will enjoy a glass of champagne as she leafs through her mounds of paperwork. (Every evening a private secretary sends up a box filled with communications from embassies abroad and reports as to what is going on in Parliament. A similar box is send to Windsor during the weekends and is diligently returned, all matters dealt with, by Monday.)

Should the Queen’s schedule call for an engagement outside of London (Scott noted her visits “are often focused on places where there has been a growth in unemployment, and on local initiatives to deal with it,”) she will travel via train or air, opting for the royal train—equipped with sleeping cabins and actual bathtubs—should she be away for more than one day.

It’s yet another slice of luxury that comes with the gig, but in her heart of hearts insiders swear she revels in the simple pleasures. At Sandringham, where a retired Philip is now stationed much of the time, they share a spacious, yet still modestly appointed, cottage called Wood Farm. “They like being in a smaller cozier house, and not having to have all the staff,” royal biographer Penny Juror told The Daily Beast. “We may dream of living in palace surrounded by flunkies, but they dream of being like us.”

While there, the Queen gets a kick out of hosting various dignitaries and even prime ministers for picnic suppers where Philip mans the barbecue and she sets the table and cleans up afterward.

And while it may be hard to reconcile the image of the always coordinated Queen, she of the trademarked stoicism and well-developed stiff upper lip, seeing to the washing up, those in the know say the off-duty monarch is quite relaxed, often thought of as the life of a gathering. 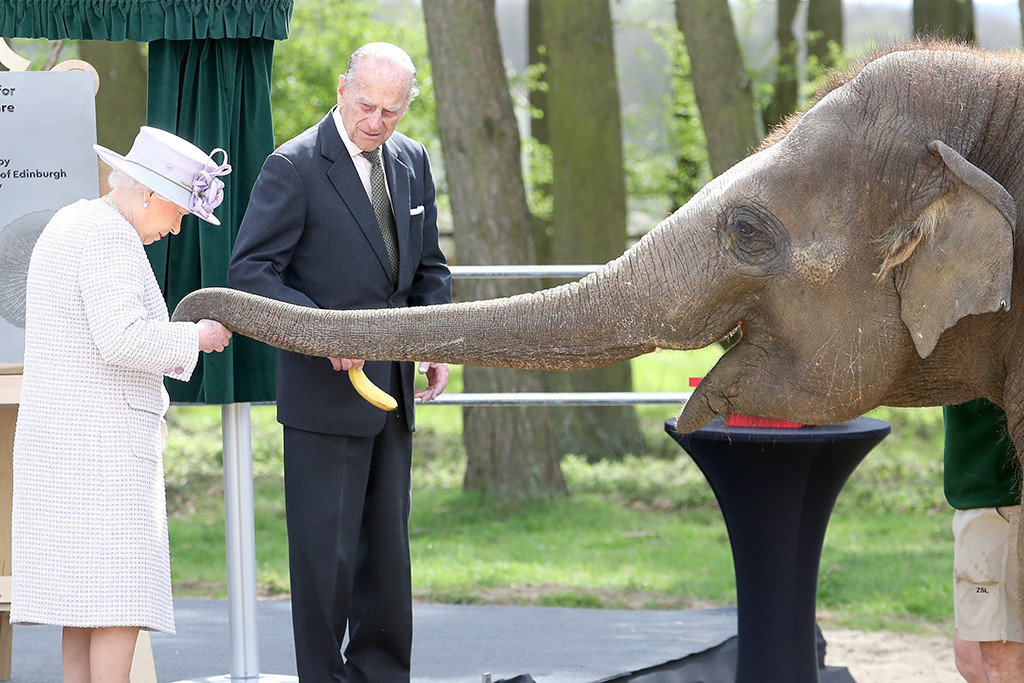 “You expect the Queen to be dignified and dutiful and stoic and all the things we see in public, but she’s also got great joie de vivre,” royal biographer Sally Bedell Smith said in a 2012 interview with CBCNews.ca. “She went to a friend’s birthday party at the London aquarium and someone saw her sitting there blowing bubbles. And she loves to sing.”

Laughing is another cherished hobby. Of the many thing that have kept she and Philip bonded throughout their nearly 72 years of marriage is the reportedly wicked sense of humor they both share.

“For her to have found somebody like him, I don’t think she could have chosen better,” Prince Edward’s wife, Sophie Rhys-Jones, has said of her in-laws. “And they make each other laugh—which is, you know, it’s half the battle, isn’t it?”

When they’re together, finding the fun is never difficult, whether they’re entertaining guests in Wood Farm’s newly renovated kitchen or judging the end of summer fancy dress competition for their staff.

According to a 2017 Daily Mail article, the couple still giggle when reminiscing about the time Philip had to explain to her what an Oompa-Loompa was mid-contest.

Though Philip, per artist Michael Noakes, who has painted the Queen on several occasions, has bragged about his ability to illicit a chuckle out of anyone within 15 seconds, his bride is found to be equally entertaining by those lucky enough to truly know her.

“Of course she’s very funny. She’s an excellent mimic,” said Bedell Smith, but the thing that stood out most when she was talking to the Queen’s various associates for her 2012 effort Elizabeth the Queen: The Life of a Modern Monarch, was her effervescent personality. Noted Bedell Smith, “She has, when she’s relaxing with her friends, this great joie de vivre, really, this spirit.”