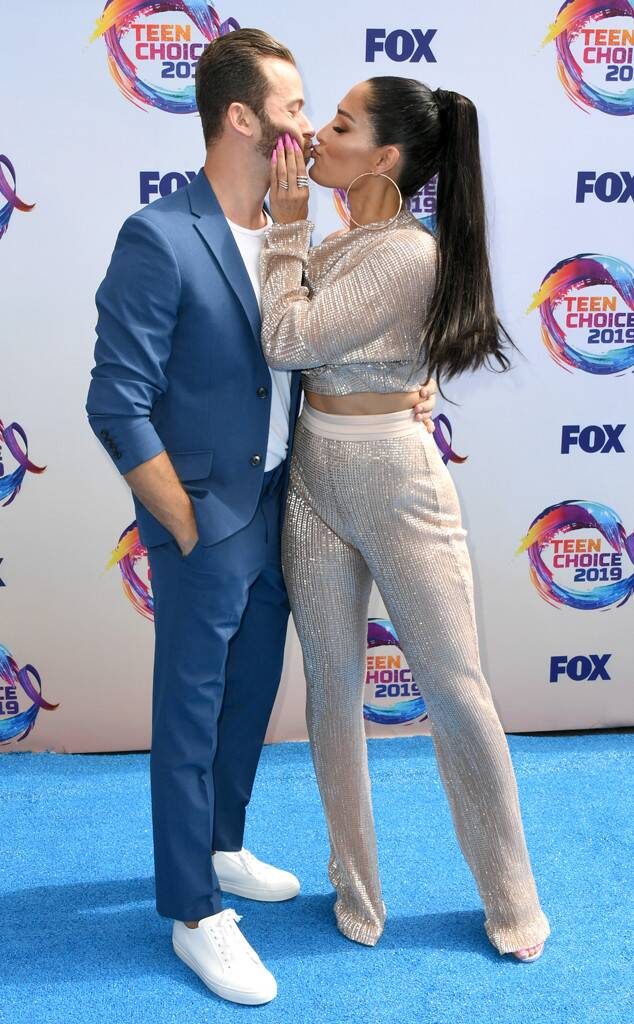 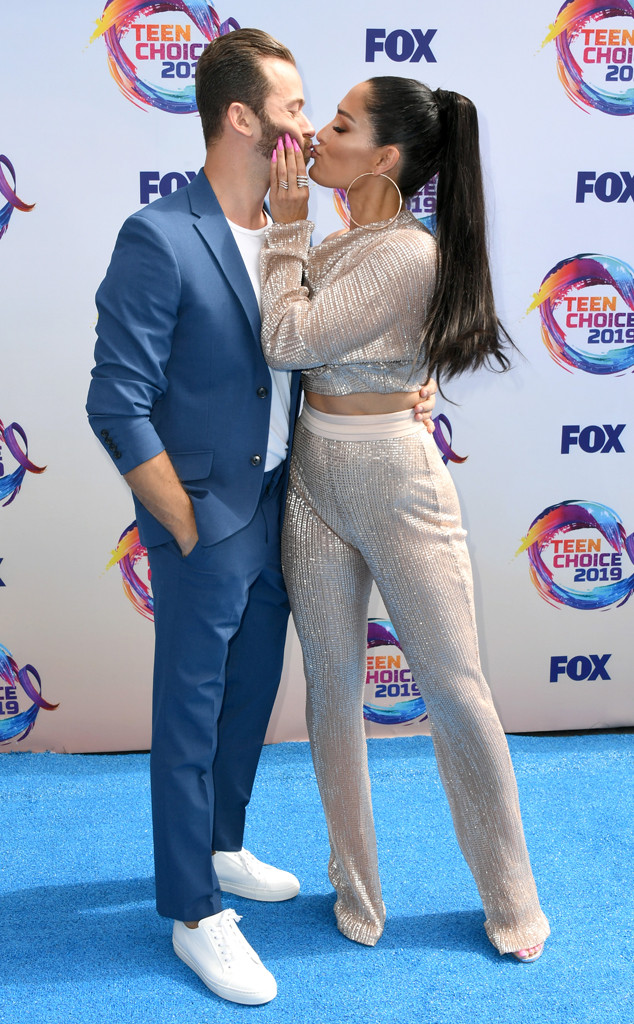 It looks like Nikki Bella and her boyfriend Artem Chigvintsev are still going strong!

On Sunday, the adorable pair had a fun date night at the 2019 Teen Choice Awards in Hermosa Beach, Calif. Posing for pictures at the star-studded awards ceremony, the couple packed on the PDA and put their love on full display.

In fact, the two couldn’t keep their hands off each other during the red carpet. At one point, they locked lips and kissed in front of the cameras. Making things even cuter during their photo-ops, the former WWE Diva playfully (pretend) kicked her sister Brie Bella as she was holding onto her Dancing With the Stars beau.

Of course, the trio was having a ball during their step-and-repeat.

For the special occasion, the Nikki sizzled in a beige lamé ensemble. She opted for loose-fitted bell bottom pants and an asymmetrical top that totally evoked ’70s vibes.

“Walking in without a surfboard and hoping to leave with another,” the reality TV personality shared on Instagram, as she showed off her flashy ‘fit.

As for the Total Bellas star’s boyfriend, he kept things classic and dapper with a blue suit and white tee.

The couple’s latest appearance comes exactly one month after they made their red carpet debut as a couple at the 2019 Nickelodeon Kids’ Choice Sports Awards. What’s more? Back in July, the reality TV personality finally put a label on her romance with her professional dancer boo. After nearly seven months of dating, Nikki said it was “official.”

Chatting on The Bellas Podcast, the reality TV star and Artem appeared together and shared the news. “The main reason why we did this dance is…I guess to…tell everyone like. I guess that we’re like, we’re boyfriend and girlfriend,” Nikki said.

“Aww you did say that, didn’t you?” Artem chimed in.

At the time, the two celebrated their “labels” with a video of them dancing along to Rita Ora‘s “Let You Love Me.” And yes, it was choreographed by Artem!

Fans of the pair will recall the two met while Nikki was on Dancing With the Stars in 2017, and her partner was none other than, Chigvintsev.

E! News learned in January that they began dating. They later confirmed their romance but didn’t want to put any labels on their relationship… until recently that is!