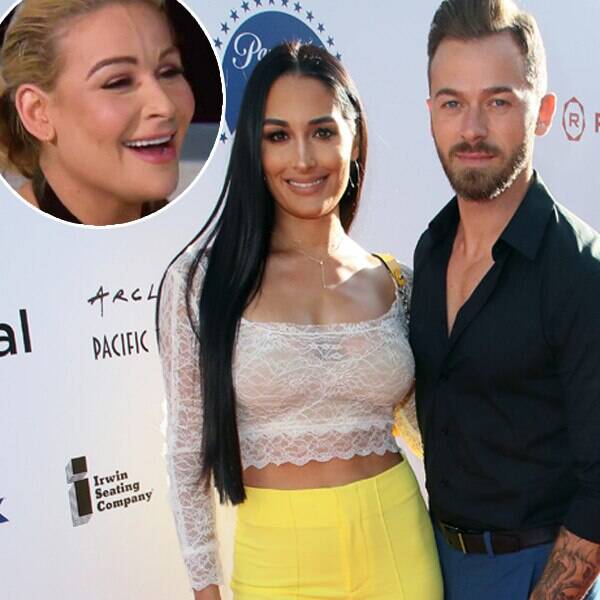 When it comes to dating, most of us would probably have to agree the crucial BFF opinion is a weighty one. And often an honest one, too.

So it’s great to hear WWE superstar Nattie Neidhart praise Nikki Bella‘s sort-of-new man in these exclusive comments to E! News, which seem to confirm Artem Chigvintsev has her stamp of approval for more reasons than one. As the Total Divas veteran recounts, Nattie recently met the Dancing With the Stars pro for the first time when she traveled to Los Angeles to appear on Nikki and twin sister Brie Bella‘s The Bellas Podcast.

And upon making his acquaintance, she—not unlike the droves of fans who’ve been swooning over Nikki and Artem for months on social media—was thoroughly impressed.

“I really like Artem,” says Nattie, calling him “really sweet” and a “total gentleman.” Are we surprised? “He was very, very respectful and polite and very classy,” she notes, before reiterating again, “I really liked him.” Three cheers for the happy couple!

Of course, much as Nattie acknowledges Artem’s winning characteristics stand on their own, she goes on to explain that her appreciation for the dancer Nikki’s been gushing over more and more this year largely stems from his noticeably positive impact on her friend.

“At the end of the day, Nicole and Brie are two of my closest friends in the world,” she continues, adding that seeing Nikki (whose full name is Nicole) “doing her thing” and “just being in her element” with Artem solidifies Nattie’s status as a fan of their relationship.

“If Artem makes Nicole happy, I support that and I support him,” finishes the wrestling champion. “Whatever Nicole wants to do that makes her feel good, I support it.”

Couldn’t have said it better ourselves. Hear more about Nikki and Artem’s romance in the video above!

Watch a brand new episode of Total Divas Tuesday at 10 p.m., only on E!