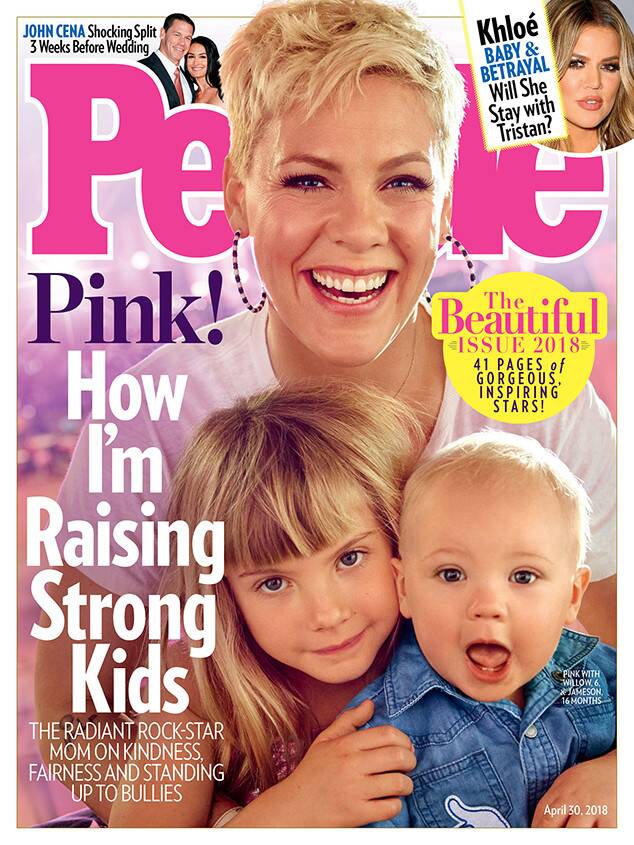 Throughout her career, Pink has always been a rockstar both on and off stage and she’s brought that cool-girl vibe into her parenting, which makes us love her even more.

Since she is being honored with the People’s Champion Award at this year’s 2019 E! People’s Choice Awards, why not revel in the glory that is Pink’s best parenting moments?

The Pennsylvania native has two children, daughter Willow, 8, and son Jameson, 2, and whether it’s her motivational and empowering words of wisdom to her kids or all of the amazing adventures she takes them on, Pink shines as a mom.

In April 2018, she was dubbed People’s “Most Beautiful Woman in the World.” In earning the title, the “What About Us” singer reminded us that she’s beautiful on the inside and out and it is one of many examples of things she is passing down to her kids. 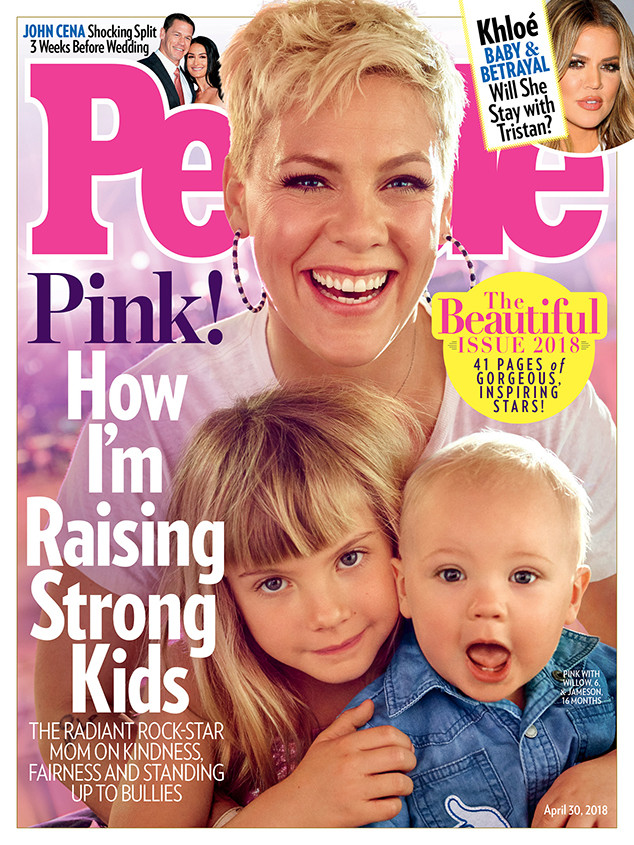 Scroll through the 40-year-old artist’s most amazing, fun and best “cool mom” moments below.

1. Traveling with her kiddos

Once she had her kids, Pink made sure to make her family a priority while on tour which means her kids (and husband Carey Hart) get to experience the world with her at all times. This year, she embarked on her Beautiful Trauma tour which took her and her family across America, Europe and Australia.

2. Posing together for the cover of People‘s “Beautiful Issue 2018”

In April 2018, Pink landed the cover of People‘s “Beautiful Issue” and she talked all about how she is raising strong kids. What better way to show off your cool mom status than posing for the cover with your children?

3. Teaching her children to donate and give back

The “Try” singer has previously been a UNICEF goodwill ambassador and her charity work has rubbed off on her children. When she was only four years old, Pink already had Willow learning how to give back through donating her toys. She also allowed her daughter to sell candy at catering during her rehearsals to benefit Haiti. 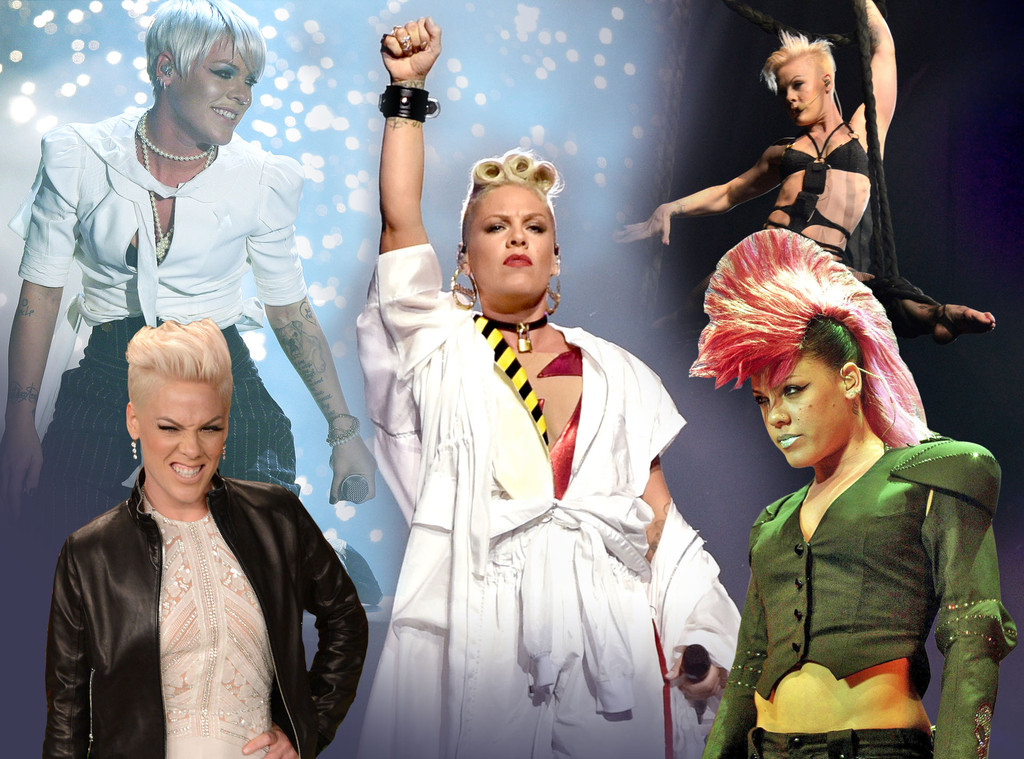 When your younger sibling was born, did your mom throw you a special party? Yeah, we didn’t think so, but Pink threw Willow a big bash once Jameson was born, and it’s just so cool.

5. Helping Willow at her lemonade stand which raised money for a no-kill shelter

When Willow decided to do her first lemonade stand, she wanted to donate all the proceeds to help save animals, so Pink helped her get it organized and they donated the money to a no-kill shelter. Clearly, Willow is her mom’s mini me.

6. Getting real about the advice she gives Willow

As Cosmopolitan‘s January 2018 cover girl, Pink opened up all about her advice for her daughter, including be weird, because “it’s very boring to be normal,” and what her daughter’s motto should be, AKA, “what would mom do?” 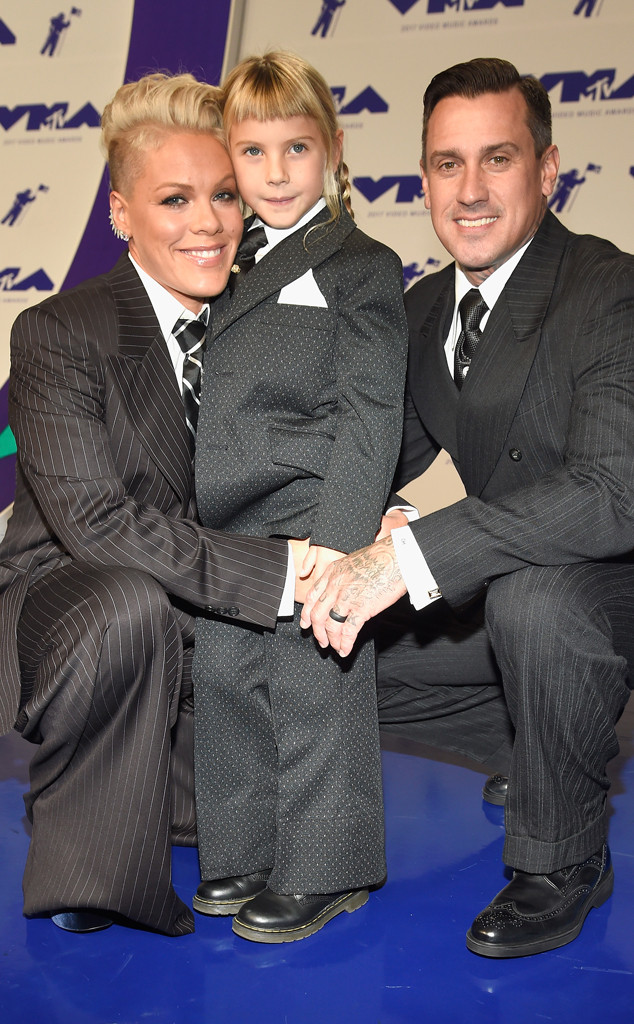 7. Giving an empowering speech at the VMAs about body image inspired by her daughter

Pink’s 2017 MTV Video Music Awards speech was the girl-power-fueled message that every kid should hear, making her the ultimate inspiration for not only her own kids, but kids all over the world. When accepting the Vanguard Award, the singer told a story about her daughter thinking she was “the ugliest girl I know,” and used that as inspiration to tell everyone watching that, “Baby girl, we don’t change. We take the gravel in the shell and make a pearl. We help other people to change, so they can see all kinds of beauty.”

8. Lying about being Shrek, just for a laugh

Okay, telling your child that you’re Shrek because of a green face mask your wearing is just genius, even if your child cries a little at the thought of you being a monster.

9. Having backstage makeup fun with her kids

Do we really need to explain this one? The 39-year-old singer always takes her kids on the road with her and sometimes she even lets them play with her makeup.

10. Bringing the whole family to the Grammys

Pink pulled off a total “mom joke” style moment when she posted a picture of Jameson crying in her arms at the Grammys along with the rest of her adorable crew.

11. Dressing up for Halloween with her kids

With her pink hair and epic stage ensembles, we’re not all that surprised that Pink goes all out with her family on Halloween.

12. Taking time on tour to make Jameson the center of attention

If being pushed around backstage through a group of backup dancers in shiny costumes isn’t an awesome way to live as a baby then we really don’t know what your definition of awesome is. 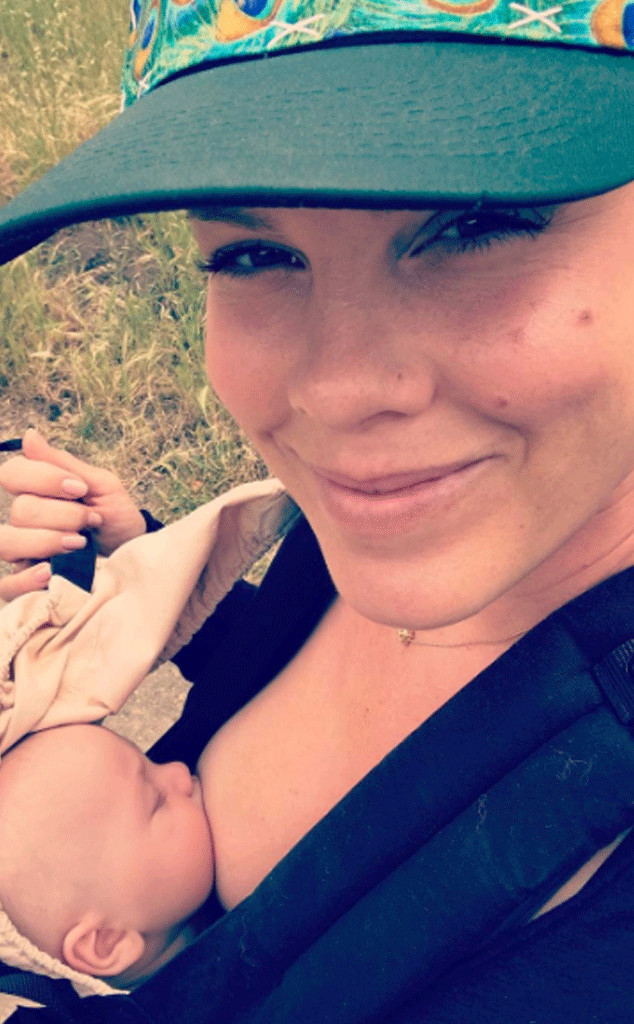 Pink is a big advocate of being yourself and staying true to what you believe in and that’s been proven time and time again with her honest posts about being a mother and breastfeeding. It’s very inspirational.

14. Bringing her children on set for all of her projects

Not only has Pink had her kids on tour with her, but when she filmed her “Just Like Fire” video from Alice Through the Looking Glass, she brought Willow along and gave her a matching costume #lifegoals.

15. Being an extreme sport enthusiast

Most moms tell you to go outside and play, but not many moms go with you. If they do play outside with their children, we doubt it’s BMX riding or other extreme sports like the “Just Give Me a Reason” singer does on the reg.

Our parents have a few pals that are fun to be around, but they aren’t star status like Pink’s friends. Seriously, the singer’s friends are very, very famous! Pink often brings her friends like Katy Perry to spend time with her children and we are totally jealous about it.

17. Crying with another mom in the grocery store, because parenting is hard

Pink really is just a mom trying to figure things out so when she posted a story about another mom getting strength from her parenting because, “I’m not afraid to f–k up in public,” and then admits she cried with the lady at the grocery store you can’t help but love her even more.

18. Realizing that losing is okay and vented about it on Instagram

In January 2018, Pink lost at the Grammys, but she performed her heart out, her daughter met her favorite singers and her husband made her a flask full of liquor, and she was totally zen about it all. “I lost my 19th Grammy nomination, I consoled another talented loser, whom I love, and I kept my feet on the ground (cause spectators like to dare me to.) y’all I’m so proud of myself I’m gonna buy myself a drink tonight. Perseverance. Perspective, gratitude,” she shared on Instagram. 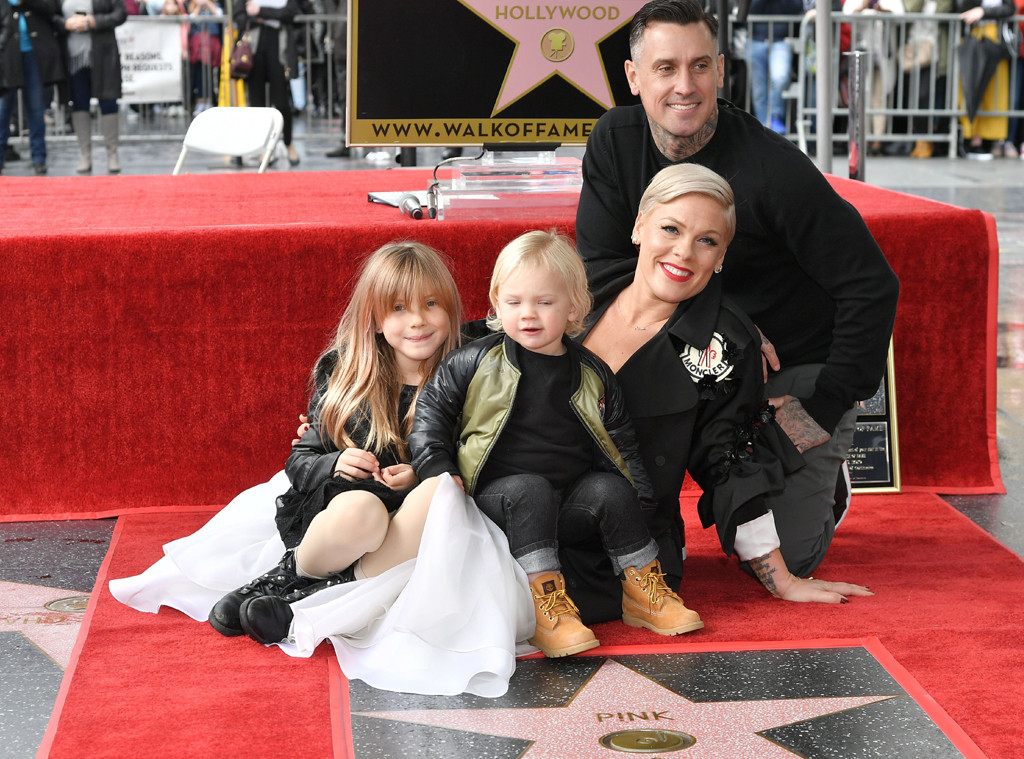 19. Handling mom duties during Her Hollywood Walk of Fame ceremony

While being honored with a star on the Hollywood Walk of Fame earlier this year, Pink gave a special shout to her kids. She shared, “My children—you guys are my stars and I would never shine without you.” She was also caught wiping Jameson’s runny nose during the ceremony proving that she puts her mom duties first.

20. Proving she can even make tour rehearsals fun for her kids

Willow turned Pink’s rehearsals into her own roller rink party. The rock star posted a posted a video of her daughter skating around the empty arena where she was rehearsing for her Beautiful Trauma World Tour.

So sweet! Pink teamed up with her daughter to record a new version of “A Million Dreams” for The Greatest Showman—Reimagined album. In the video, the star revealed, “I grew up listening to Annie and no one has done this for me, for my heart since I was a little girl. And to have her finally have something like this…You made our favorite movie ever.”

22. Allowing her daughter to fly high in the sky—literally!

Willow’s already a daredevil just like her parents. Hart shared a video of their daughter flying high above an arena just like her mom. Check out the clip to see all of her flips and tricks.

The 8-year-old again proved that she was fearless when she climbed to the top of Pink’s stage while her brother played the drums as seen on their dad’s Instagram. Consider us impressed!

Pink has never been afraid to show off unique sense of style and her daughter is following in her footsteps with a shaved punk rock haircut. “Loving my punk rock daughter,” Hart wrote on Instagram. “Remember everyone, fly your own flag. There is no box to be put in. Its better to be your own self. Own it, and love it. And if anyone has a problem with it, tell them (politely) to move on.”

“Cant wait to see the woman you grow up to be,” he added. “I have a feeling you are gonna be strong, fierce, companionate, and caring. I’m so proud of you, willow.”

24. Encouraging her children to be part of her tour

Pink makes her tour a family affair with her kids even stepping in to help out during shows. She revealed during an On Air With Ryan Seacrest interview that her daughter assists with the costumes changes during her performances.

25. Co-starring with her daughter in a music video

If it wasn’t enough to sing with her mom, Willow also co-starred in Pink’s music video for “Wild Hearts Can’t Be Broken.” The song is anthem encouraging women and girls to stand up for themselves. In honor of the video’s release, she also made a donation to UNICEF.