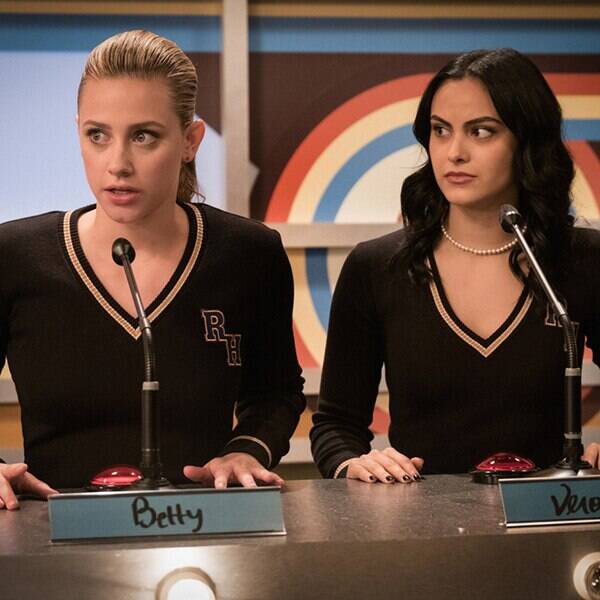 That may sound like gibberish but hear us out: when Riverdale knows it is being utterly ridiculous, the ridiculousness is a whole lot easier to process. When things just happen casually and we’re just supposed to accept them as being normal, it makes us truly feel like we’re losing our minds. A secret new speakeasy can open and be successful in approximately 24 hours? Sure! A high school boy is hired to be tickled on camera for money? Absolutely!

This week’s episode was ludicrous, but not if you ask a single one of the characters. It almost looked like just a totally normal day or three in Riverdale, until you looked a little closer and started asking questions.

Here is a list of some of the wild things that happened this week.

– Betty was on a quiz show, and to help her out, her mother somehow got a hold of all the questions and answers ahead of time. Betty claims she simply tore them up and threw them away in her dressing room, and obviously they were later found. Did she really not think it was a dumb idea to throw them out in her dressing room at the quiz show? Why did she even get her own dressing room when she was on a team of four?

Anyway apparently Betty knew all the answers herself anyway, but got suspended because of the cheating. Thanks, Alice!

– Veronica and Cheryl have teamed up to produce maple syrup rum (last week we thought they were just literally mixing the rum with maple syrup, but it’s actually part of the base recipe, instead of molasses). First, they turned the Bonne Nuit into a dance club and handed out shots of it, only to then get raided by Hiram and the police. Then, they kept the dance club as a front while the real business moved to Cheryl’s mom’s old brothel. All of this was open and fully functional within a matter of days, even as Cheryl and Veronica took breaks to be on the Quiz Show team! So efficient!

– Cheryl is keeping her mother hostage/under house arrest in the brothel, and she has to wear a mask to conceal her identity, even though the mask kinda looks like her actual face.

– Archie is still trusting his uncle even though his mom warned him that guy is bad news, and now he’s caused a rift amongst the construction workers. At least Archie’s not punching anyone! This is the most normal and also most boring thing happening right now.

– Kevin, who has barely been seen in weeks, met up with a “Grind ‘Em” date who immediately asked him back to his hotel room and offered him the chance to be tickled on camera for money. He then recruited Fangs to join him in these tickling videos. We repeat: the first time we see Kevin doing anything almost all season, he is being paid by a strange man to be tickled on camera. This is clearly going to go badly because otherwise why would it be a storyline on this show?

– Jughead stole Betty’s life story as the plot of his first Baxter Brothers book, and she is understandably pissed about this. She should be upset at everyone around her, honestly. Her mother ruined her Quiz Show appearance and now her boyfriend is publishing her daughter-of-a-serial-killer tale without asking her first, and apparently, fear that that story will get out is the whole reason she didn’t get into Yale, which is a whole other thing.

– Jughead is so mad at Brett that he has challenged him to that thing Stonewall secret society members and regular high school students engage in when they get mad at each other: a duel! Guys. Are you sure? ‘Cause we’re not so sure about that.

– In four weeks, after Jughead’s apparent death (sure), Betty’s not sure she can go on, but Archie’s there to put his hand on hers and promise they’ll get through it together.

Next week’s episode apparently involves a lot of punching and we’re all so thrilled to be back to that. Is it bad that we can’t wait for spring break to finally get here?

Riverdale airs Wednesdays at 8 p.m. on The CW.