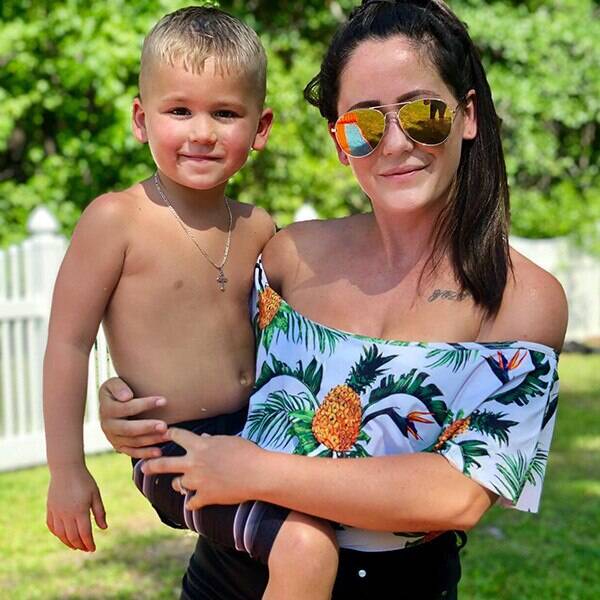 Jenelle Evans and husband David Eason reunited with her kids on Saturday to celebrate her son Kaiser‘s fifth birthday, as they continue to battle to regain custody of the children.

The group attended a party in the backyard of the home of the mother of Kaiser’s dad Nathan Griffith. Jenelle’s own mother Barbara brought over the couple’s daughter Ensley, 2, and Jenelle’s son Jace, 9, who like his brother, is also from a previous relationship.

“Jenelle, David, Nathan and Barbara were all on hand to celebrate Kaiser’s birthday,” a source told E! News. “Oddly, everyone got along. Nathan invited Jenelle and David. The party was held at Nathan’s mom’s home. Barbra brought along Ensley and Jace. This was an unsupervised visit.”

Jenelle, 27, posted photos from the incident, marking the first current pics of her with her kids since a judge ruled in May that she and David would temporarily lose custody of Kaiser, Ensley and his older daughter Maryssa, weeks after he allegedly intentionally shot and killed his wife’s French bulldog after it “snapped” at the toddler. The incident led to Jenelle’s firing from Teen Mom 2.

Amid the custody battle, for the past few weeks, Jenlle has been allowed to see her children during weekly supervised visits. Kaiser has been living with his dad, while Ensley has been staying with Jenelle’s mother, who has also had custody of Jace for most of his life. David’s older daughter is with her mom.

Photos obtained by E! News and posted on Jennelle’s Instagram show her, David, Ensley, Kaiser, Jace and other kids at the party.

There was Domino’s Pizza and a big birthday Scooby-Doo sheet cake. The kids wore swimsuits and floaties.

In one photo, Eason smiles as he squats behind Ensley and Kaiser.

“Can’t believe you are 5 already! You might be getting older but you’re still my baby #MommasBoy #HappyBirthday,” Jenelle wrote, alongside a photo slideshow led by a pic of her holding Kaiser.

Earlier this month, Jenelle posted on her YouTube page a throwback video of her and David and the children playing with chicks and chickens on their homestead farm. Nugget the dog appears with the kids, not acting aggressive in any way.

“We are fighting for all the children to come home,” she told E! News earlier this month.