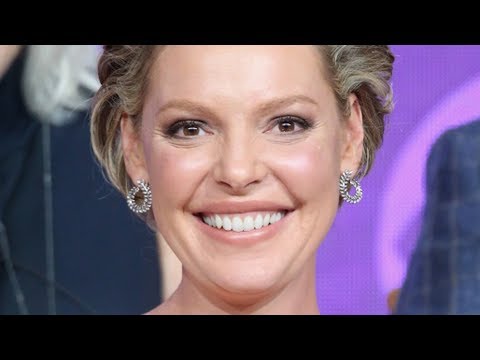 At one point, Katherine Heigl was considered TV's newest "it" girl, with a stunning future ahead of her on both the small and silver screen Thanks to some careless words and poor professional decisions, Heigl has gone from famous to infamous, and her reputation has reduced her from starring in an ultra-hit TV series to being known as that woman from the ZzzQuil commercial

Here's how she ticked off everyone in Tinseltown Grey's diss Grey's Anatomy was instantly popular, and for Heigl, the mega-hit show offered a launch pad from which she was expected to jump straight into the A-list Her turn as Dr Izzie Stevens earned her an Emmy for best-supporting actress as well as two Golden Globe nominations But those good vibes didn't last long: Heigl burned more than a few bridges by publicly denouncing the show's writers and declining consideration for the Emmys in 2008

In a statement, she explained: "I did not feel that I was given the material this season to warrant an Emmy nomination […] I did not want to potentially take away an opportunity from an actress who was given such materials" Grey's Anatomy creator Shonda Rhimes slammed Heigl for her unkind comments, telling Oprah: "On some level, I was not surprised" "You weren't?" "No" "When people say who they are, believe them" "I carry that with me a lot and it has served me well

" Fool me twice Heigl's history of bad-mouthing productions she also starred in didn't begin (or end) there The same year she dissed Grey's, she also threw some shade at Judd Apatow's Knocked Up She told Vanity Fair: "It was a little sexist It paints women as shrews, as humorless and uptight, and it paints the men as lovable, goofy, fun-loving guys It exaggerated the characters, and I had a hard time with it, on some days

I'm playing such a bitch; why is she being such a killjoy? Why is this how you're portraying women?" Unsurprisingly, her comments were not well received by the cast and crew, including her co-star and on-screen love interest Seth Rogen, who told The Hollywood Reporter: "People seemed to like it We were funny together I was having a really good time, and then when I heard afterward that she didn't like it, that she seemed to not like the process, and she did not like the end product either, I think when that happens [] your trust feels somewhat betrayed" Can't go home After Heigl left Grey's Anatomy in 2010, she suffered a series of cinematic setbacks Although Knocked Up and her subsequent rom-com 27 Dresses did well at the box office, things started to go downhill very quickly for Heigl's filmography Critics had a field day slamming her movies like Killers, New Years Eve, and One for the Money, and ticket-buyers weren't too keen on any of them either While promoting the latter of those disappointments, Heigl expressed an interest in returning to her roots on Grey's to reprise her role, perhaps in a last-ditch effort to reboot her reputation

However, Rhimes publicly declined the offer, telling TV Guide: "I think it was really nice to hear her appreciating the show At the same time we are on a track we have been planning The idea of changing that track is not something we are interested in right now" In case that was too polite to make Rhimes' perspective clear, she's also since turned Heigl's name into a term meaning "people difficult to work with," telling People that on the Scandal set: "There are no Heigls in this situation" Yowza

"It sucks, I am sorry that she feels that way and I wish her nothing but greatness and I have nothing negative to say about Shonda" Family baggage Another common complaint about Heigl is that she comes with some serious baggage in the form of her mother, Nancy Heigl, who's earned her own rep in the industry An anonymous source who worked with Heigl on Life As We Know It complained to The Hollywood Reporter of the momager's treatment of the crew, saying: "I have never experienced anything like Nancy Heigl […] Whatever you'd say, you were an idiot The call would be, 'This is the worst craft service we've ever had! There's nothing to eat! This is the worst wardrobe!' You knew that every day, you were going to get slammed

" Heigl, however, thinks her mom's staunch persona has been a complete plus for her progress She told Vanity Fair: "She didn't care if she made any friends in this town Her job was to protect me and to be very fierce in defending me [] This is all a game of chicken, and my mother is really good at chicken" Sorry, not sorry Hindsight being 20/20 and all, Katherine Heigl has since expressed remorse over the way she's handled certain situations in her past She told Howard Stern in 2016 that she did apologize to Rhimes for her controversial Grey's diss, saying: "Cuz I was really embarrassed, so I went in to Shonda and said, 'I'm so sorry That wasn't cool

I should not have said that'" But she didn't back down from her feelings on the subject, only that she had declared her feelings so publicly She told the New York Times in 2010: "I've been told I'm too forthright with opinions Well do they want a fierce woman or milquetoast? Should I be me, or should I pretend to be something I think people want? Pretending seems pretty ridiculous to me I didn't think that what I was was so bad that I needed to hide it

" That take it or leave it attitude might seem brave, but it's also done some damage to her public reputation and lost her some work opportunities Attempted comeback Following her failed effort to capitalize on the book-to-screen craze with a starring role in 2012's One for the Money, Heigl went on to nab starring roles in smaller films like 2015's Jenny's Wedding and 2017's Unforgettable Unfortunately, both were critical misses that also failed miserably at the box office Her luck was no better on the small screen, either Both NBC's State of Affairs and CBS's Doubt, each featuring Heigl in the lead role, were dead on arrival and unceremoniously cancelled after a single season

However, the book isn't closed on Heigl's career just yet Following the departure of Meghan Markle from USA's hit series Suits, Heigl stepped in to join the series for its eighth season in January 2018 and has engaged in a massive clean-up project to restore her reputation In a chat with People, she showed a lot of humility and gratitude for the opportunity to star in a show she'd loved so long, saying: "The first time I actually walked on the stages, and it sort of blew my mind It was so strange to almost dive into my TV screen and be in the world that I’ve been fascinated by for years now" Heigl has had trouble connecting with audiences in recent years, but she could be well on her way to reaching them once again