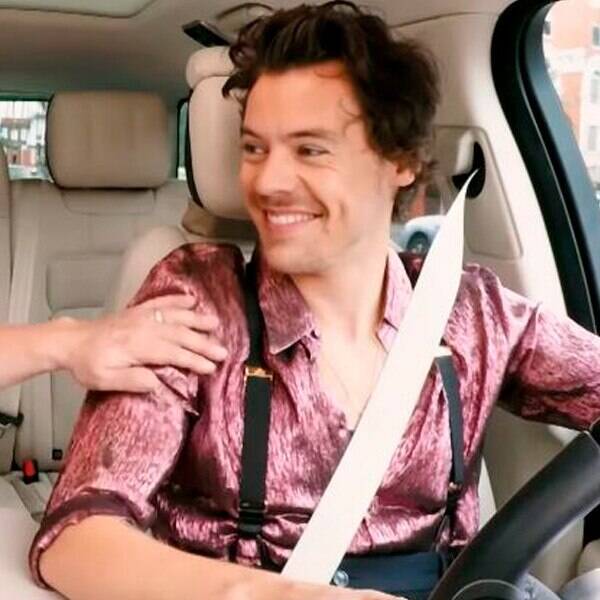 My, my, my, how the tables have turned.

Harry Styles served as the guest host of The Late Late Show with James Corden on Tuesday night, and in a delightful surprise, he hosted a segment of “Carpool Karaoke!” And his guest was none other than James Cordenhimself. (Styles previously appeared on the hilarious sing-along series in 2017.)

Donning a metallic pink shirt with black pants and suspenders, the “Lights Up” singer picked up his fellow Brit and together, they made their way to work. Rather than singing right away, Styles opted to ask the Cats star to give him some hosting tips.

“Well, a big thing is you’ve got to make your guests feel comfortable,” the host shared. “A lot of that is feigning enthusiasm. Do you know what I mean? So, even if a guest tells a story that isn’t that funny, it is.” Then Corden had Styles say the first thing that came to his mind, which he would respond to with said feigned enthusiasm.

As Styles said, “I’m gonna park the car,” Corden cracked up, saying, “Reggie! He’s going to park the car! Oh my God, more of this—if we can stand it—when we come back after the break.”

Then, it was the “Adore You” singer’s turn, and Corden delivered a particularly boring line to help him practice. “Well, I saw the doctor,” he said. “And he said it wasn’t ingrown at all!”

Naturally, Styles nailed his response. The former One Direction star laughed and said, “Reggie! Reggie! It wasn’t ingrown at all! We’ll be back after the break, if we can stand it!”

Corden’s next tip was the following: “And as soon as you’ve gone to break, you look at them with disdain.” The magic of television!

Next on the agenda was talking a bit about wardrobe options, followed by the two Brits singing along to Styles’ “Watermelon Sugar.”

When they finally got to work, Styles realized something.

As he asked Corden, “Wait, wait, if you’re here anyway, why aren’t you hosting the show?” Cue the host saying “I gotta go” and sprinting out of the car.