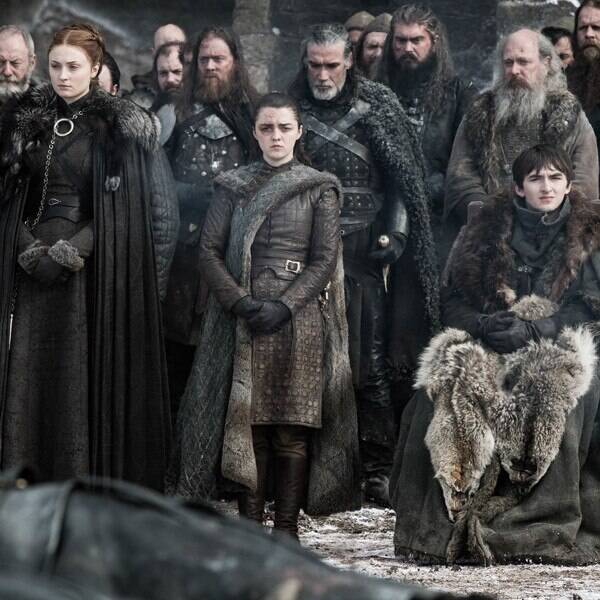 Now that was…not exactly what we were waiting for, but it was eventful.

Some stuff has finally happened in the fourth episode of the final season of Game of Thrones, including a long-awaited hookup, a few important conversations, a meeting of a couple armies, and the beginning of a showdown with one devastating end.

First of all, the good news: we didn’t think Brienne would survive the battle after that heartwarming moment when Jaime knighted her, but it turned out that she had to survive so that Jaime could knight her with a different sword if you know what we’re saying (we’re so so sorry). Basically, after Tyrion deduced that Brienne was a virgin during a drunken game, Jaime later showed up at her room with some wine and started finding reasons to remove items of clothing.

Soon, Brienne was taking off her own shirt, and they were hooking up just like they have in so many fanfics before.

That part of it ended fine, but then Jaime got all in his head about all the really terrible things he’s done, and headed off to deal with his sisterlover while Brienne cried, which was rude on every level because Brienne is a freaking knight now, so Jaime had better be on his way to remove Cersei’s head so he can come back and lay it at Brienne’s feet, or to bring back all of Cersei to allow Brienne and Sansa both to be present for her death.

Most of Winterfell got a little lusty and romantic in their post-battle celebration, to varying results. Even Tormund found a girl who wasn’t afraid of a wildling, and in fact seemed pretty excited to be with a wildling.

Dany declared Gendry no longer a bastard and named him Lord Gendry Baratheon of Storm’s End, and he tried to celebrate by proposing to Arya, because that’s what you do when you hooked up once and then didn’t die in battle. Arya kissed him but refused, because she’s not a Lady and she never has been.

And Jon and Dany canoodled a bit while they also got down to some serious business: what are they to do about Jon’s true parentage?

Dany’s plan is to tell absolutely no one at all whatsoever for any reason at any point. Jon thinks they can totally all live together happily, and Dany agreed, as long as absolutely not a single person knew the truth.

So then of course, Jon gathered with his siblingcousins under the big tree and told them the truth, and Sansa then went and told Tyrion, who told Varys, and basically lots of people know now, so LOL to Dany’s big plan.

The next step in terms of ending this show was finally going up against Cersei, so that’s where the fleet headed, only to find themselves running into Euron Greyjoy and all his dang ships. He managed to kill Dany’s other dragon, and Missandei

Cersei was obviously delighted by this, and her plan was to keep her gates open and make sure that if Dany were to come to take the city, she’d have to kill all the people in the city to do it. And that’s what Varys reminded her too, along with the fact that she’s been trying to avoid what happened the last time there was a coup.

Tyrion then got a chance to talk to Cersei herself, and he did his best to appeal to whatever maternal humanity and rationality Cersei’s got left, but nah. After Missandei’s last word of “Dracarys,” Cersei had the Mountain cut off her head.

Let’s all be real and accept that Dany would never have surrendered no matter what, but Missandei’s death is real dumb and not the kinda death we were asking for when we asked for deaths.

Now, if her last word of “dracarys” had set off the last dragon and he had just burned Cersei right up, that would have been awesome. But instead she just died!

Bronn showed up out of nowhere to see if Jaime and Tyrion could match his deal he had made with Cersei, and he seemed satisfied that he could. So now Bronn’s on Winterfell’s side? Sure.

Sam and Gilly are having a baby and if it’s a boy it will be named Jon. Great news but no one’s got time for this or to listen to you explain your sex life, Sam and Gilly.

Tormund decided to take all the wildlings back north, and Jon sent Ghost along with him. As Twitter angrily pointed out, Jon didn’t even give Ghost a pet goodbye, which is just a garbage move, Aegon.

The way Sansa stood and surveyed all the battle survivors coupling up made us crave for Sansa what Arya and Brienne just got, even if that requires some super hot never-before-seen Winterfellian or wildling suddenly appearing out of nowhere for that purpose alone, who then supports her as she kicks some ass and takes some names. (We’re still writing fanfic over here, leave us alone.)

Next week, all the characters are apparently going to look at things, and we cannot wait.

Game of Thrones airs Sundays at 9 p.m. ET on HBO.