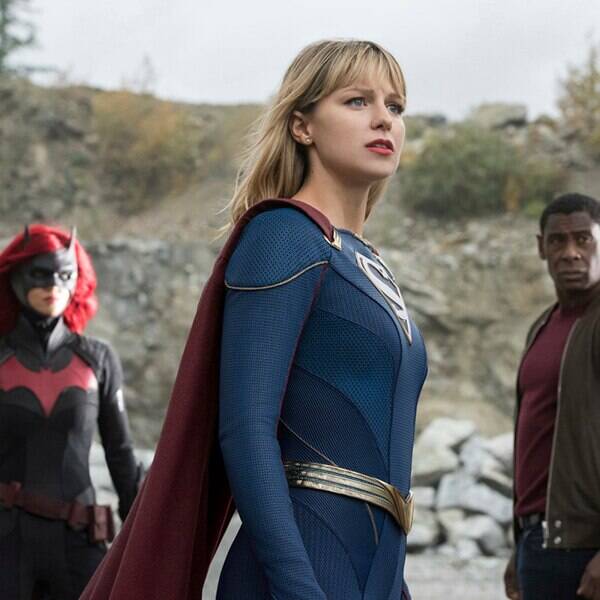 Caity Lotz promised a cameo that everyone would lose their minds over, and the final two episodes of Crisis on Infinite Earths delivered within the first half hour.

After we learned how the Monitor created the Anti-Monitor by accidentally opening a breach to the anti-universe, we saw Oliver complete his transformation into Spectre. He then went to the Vanishing Point, where the Paragons were busy losing their minds coming up with ways to try to restore the multiverse, which had been completely erased. Spectre had all the instructions, though they were very confusing and vague on first watch, and it involved Barry going into the speedforce. Once Barry got in there, he found himself face to face with another Flash, one played by Ezra Miller, AKA The Flash from the DC movie universe, who hasn’t actually gotten to be the Flash yet!

He didn’t seem to know he’s called the Flash, but he had a cool suit, though he thought Barry’s looked way more comfortable. The movie and TV universes have been so pointedly separate so far that this cameo was beyond shocking. We left our bodies for a moment, just because it was like something incorrect had happened. Like a breach had opened where it shouldn’t have. And thus we momentarily forgot to pay attention at all.

By the time we got our brains back together, Barry was collecting the Paragons from various scenes throughout the speedforce, and Spectre/Oliver was taking them all to the dawn of time, where they could recreate the universe from scratch. (We are going to have to watch this a couple more times to understand all of this.)

The group fought off the Anti-Monitor’s shadow demons while Oliver fought of the man himself, and as Oliver sacrificed himself again and appeared to die for good, a new universe began to form.

Then, Kara woke up in her apartment, confused as hell, and late for a Nobel Peace Prize ceremony honoring Lex Luthor. She then discovered that Lex Luthor is now her boss, and she and the Flash live on the same earth, and in fact, all of the heroes live on just one earth: Earth Prime. And everybody on Earth Prime knows about those heroes, including the Legends.

The Anti-Monitor was unfortunately still around and still had to be defeated, with help from a bomb that would keep him in a constant state of getting smaller, and the team took care of it relatively easily even though he made himself realllllly big first.

Finally, as things calmed down, Barry took an old Star Labs research facility and turned into what comic book fans will recognize as the Hall of Justice, compete with a fancy table for all the heroes to sit around. We also learned that on this new earth, Superman and Lois have two sons, and Diggle and Lyla now have both baby Sara (who was erased in Flashpoint) and baby John.

We also saw the president announce that Oliver had died, thanking him for his service in saving the entire world, and then we got a voiceover from Oliver as he explained the creation of a new multiverse. The CW’s heroes all exist together on Earth-Prime, so that’s now where The Flash, Supergirl, Legends of Tomorrow, Black Lightning, the last few episodes of Arrow, the Arrow spinoff, and Superman & Lois will all take place.

The upcoming Stargirl, which will premiere first on DC Universe and then on The CW, is on Earth-2. Doom Patrol is on Earth-21. Brandon Routh’s Superman still exists on Earth-96.

“We knew from last year quite frankly that we were going to merge and create Earth CW, basically, but Earth Prime sounds better,” executive producer and writer Marc Guggenheim told press after a screening of the first two episodes of the crossover. “So all the CW [superhero] shows will be on the same earth.”

This is also the explanation for why Smallville’s Clark Kent had given up his powers, according to Batwoman EP Caroline Dries.

“I didn’t like the idea of thinking that there could only be one Superman, and we would lose Clark, our Tom Welling Clark as Superman when the universes morphed into one,” she said. “And so the idea at least that allowed me to sleep at night was thinking if he had retired the Superman of it all, that there was a chance that he would still exist in our Universe Prime.”

That opens up a whole list of questions we haven’t gotten a chance to ask yet, and we likely will have more as we watch this again, but it’s safe to say nothing will ever be the same in the Arrowverse ever again.