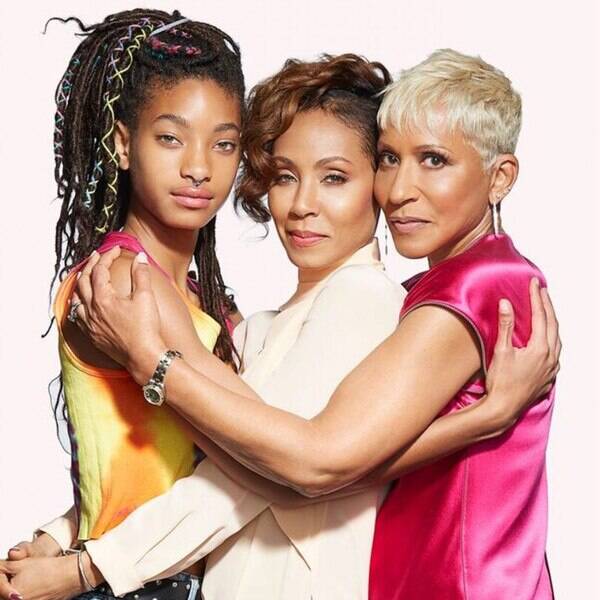 No subject is off limits on Red Table Talk.

Jada Pinkett Smith dives deep into topics including sex, racism and infidelity on her show. No matter the subject, the conversations are always open and honest giving fans an inside look at the lives of her and her guests.

It’s these no hold barred interviews that are just one of the reasons why the Facebook Watch series is up for The Daytime Talk Show of 2019 at the E! People’s Choice Awards.

The 47-year-old actress is joined by her daughter, Willow Smith, and her mother, Adrienne Banfield-Jones, making the show feel like a true family affair. The trio pull back the curtain on their famous family as they delve into secrets and discuss their struggles during each episode.

So, now it’s time to check out the craziest confessions from the ladies and their guests and cast your vote for the PCAs. From Jordan Woods to Ciara, you won’t believe what celebs reveal when they are sitting around the red table.

Find out if Red Table Talk wins the prize for The Daytime Talk Show of 2019 when the People’s Choice Awards airs live on E! on Sunday, Nov. 10.

Woods broke her silence on Red Table Talk following cheating allegations between her and Tristan Thompson. The television personality was accused of hooking up with the NBA player while he was still with Khloe Kardashian. She denied the gossip and claimed that things were blown out of proportion.

“I should have gone home after the party. I shouldn’t even have been there,” the social media influencer revealed. “Never once was I giving him a lap dance, making out with him, sitting all over him. Never once did we leave the public area, go to a bedroom, go to a bathroom. We’re all in plain sight.”

The interview ignited a Twitter firestorm with the Good American designer claiming that her former friend was lying. “Why are you lying @jordynwoods ?? If you’re going to try and save yourself by going public, INSTEAD OF CALLING ME PRIVATELY TO APOLOGIZE FIRST, at least be HONEST about your story,” the Keeping Up with the Kardashians star wrote. “BTW, You ARE the reason my family broke up!”

The “Whip My Hair” singer also shared that she started watching pornography when after she discovered it on Tumblr at age 11.

It may appear that Ciara is living in a fairy tale after she married Russel Wilson in 2016. But, the 33-year-old singer reflected during her interview on Red Table Talk about how her breakup with Future and becoming a single mother affected her outlook on life.

“If I wouldn’t have gone through those things, I may not appreciate the man I have in my life,” the Georgia native explained. “I may not appreciate when it is really going good and everything is falling into place. You need those roller coaster rides. I believe in my journey happening in front of the world for a reason.”

The “Level Up” performer also dished on balancing family and work, setting goals and why she fell in love with her husband.

4. Common Shares How He Is Breaking Destructive Cycles

After the release of his book, Let Love Have The Last Word, Common shared during his interview on Red Table Talk how he is working to break the cycle of failed relationships in his life and how he would like to become a husband.

“I want that partnership, to be able to experience life where I’m growing as a human being and kinda spark each other,” the 47-year-old rapper revealed. “And it’s fun too.”

The Selma actor also reflected how therapy has helped through difficult times, his relationship with his daughter, how he dealt with past trauma and what he is looking for in a partner. Smith also advised him that marriage can be difficult and how it takes effort to make a relationship last.

Kristen Davis‘ conversation on Red Table Talk made headlines when she discussed her experiences with interracial adoption. She adopted two black children and she opened up about the challenges she faced being their mother.

The Sex and the City actress revealed the extensive adoption process that she went through as a single mother, learning more about black culture and finding a diverse village where her children can thrive.