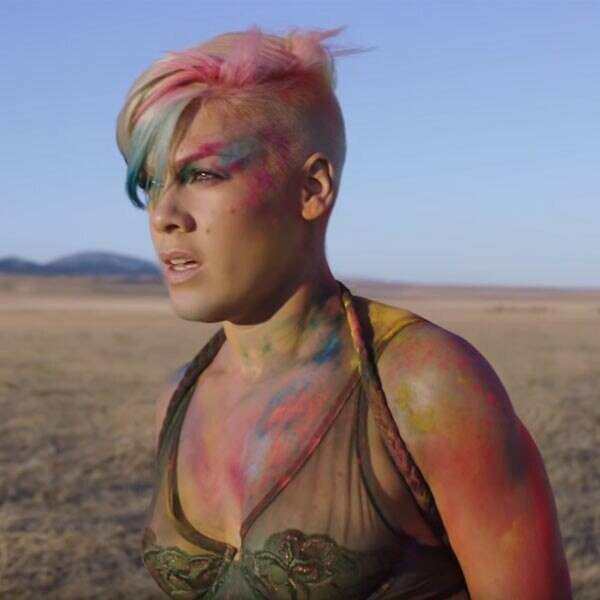 It’s time to raise your glass to Pink!

On Tuesday, E! announced that the singer will be this year’s People’s Champion recipient at the 2019 E! People’s Choice Awards, honoring her charitable work with organizations like UNICEF and the Make-a-Wish Foundation.

To celebrate the charitable artist nabbing the honor, we’re looking back at her iconic career, specifically at the many unforgettable music videos she has blessed us with over the years.

Whether your favorites are from her first album, M!ssundaztood, or from this year’s album Hurts 2B Human, the songstress has proved for decades that her music videos are consistently creative. After all, her body of work was recognized in 2017 with the Michael Jackson Video Vanguard Award at the MTV VMAs.

Many of her music videos incorporate her physical prowess, which she shows off frequently at live award shows and on her concert tours. The artist is even up for a People’s Choice Awards nomination with Beautiful Trauma in contention for The Concert Tour of 2019.

Be sure to tune in to the E! People’s Choice Awards on Sunday, Nov. 10 to watch the performer accept her trophy.

In the meantime, let’s get the party started right now!

“Get The Party Started”

Fittingly, we’re getting this roundup started with a bop from Pink’s 2001 breakthrough album, M!ssundaztood. “Get The Party Started” featured Pink and her friends as they get ready for a night out on the town, steal skateboards and charm their way into a nightclub. You also can spot a pre-Britney Spears fame Kevin Federline dancing in the background!

The video went on to nab two MTV Video Music Award wins for Female Video and Dance Video, which was a pretty impressive way for the rising star to kick off her career.

Pink’s wild west-themed music video for “Trouble” off of her third album, Try This, featured Pink galloping into Sharktown (Population: 96) and getting into a brawl with the residents.

Pink eventually gets arrested by a sheriff, who she later seduces to escape, played by none other than Jeremy Renner.

In 2008, Pink released her fifth studio album, Funhouse, and one of her most iconic music videos to date with “So What.” In it, a chainsaw-toting Pink cuts down a tree engraved with “Alecia + Carey,” a reference to her real name (Alecia Beth Moore) and her husband, Carey Hart.

Hart appeared in the music video, reportedly unaware of what it was about when he arrived on set. However, with lyrics like “Guess I just lost my husband, I don’t know where he went,” the song and video were clearly about their tumultuous relationship, since at the time the two were briefly estranged.

The performer called back to the video in 2017 during her Michael Jackson Video Vanguard Award medley by driving around on a lawnmower on the VMAs stage. Except, that time, she and Hart were back together, making their love story the happily-ever-after kind we love to see.

Also from her album Funhouse, “Please Don’t Leave Me” paid homage to Stephen King in a music video that is arguably also a short horror film.  In it, Pink begs her boyfriend to stay and becomes increasingly hostile as he tries to escape, breaking his legs Misery-style to keep him around and eventually chopping down a door he is hiding behind like it’s the end of The Shining.

The deliciously dark music video was directed by Dave Meyers, whose recent work is still as twisted as it was back in 2008, as he also served as the director for Billie Eilish‘s moody “Bad Guy” music video.

In “Raise Your Glass” from her album Greatest Hits…So Far!!!, Pink dons a Rosie the Riveter getup and cheers to all the “underdogs” and “dirty little freaks” who fall outside of society’s norms.

The artist explained to MTV News that the song was inspired by her gay friend getting married, saying, “I threw my best friend’s wedding in my backyard — [she] is gay and she married her wife, and it was absolutely beautiful. At the end of it, her mom said, ‘Why can’t this be legal?’ and started crying. It was just the most heartbreaking thing I’ve ever seen, so that’s why I’m doing it in my video.”

Pink’s support for the LGBTQIA+ community is just one of the many reasons we love the humanitarian and can’t wait to watch her accept her honor at the PCAs!

Content warning: The above video depicts images of self-harm and a suicide attempt.

Pink’s ballad was a message to everyone out there that you are perfect just the way you are, and it was all the more heartwarming that she wrote the song while pregnant with her daughter, Willow Sage Hart.

The piece was nominated at the MTV VMAs for Video with a Message, and while it didn’t win, Pink got to reiterate its message to her own daughter while on MTV’s stage in 2017 when she accepted her Vanguard Award.

Pink shared a story that her daughter believed herself to be ugly and that she, “Looked like a boy with long hair.” Pink stated that she rejected that notion and told her daughter, “We don’t change. We take the gravel and the shell and we make a pearl. And we help other people to change so they can see more kinds of beauty.”

Pink ventured into a more artistic side of herself with her music video for “Try.” The singer showed off her impressive physical power with a Parisian-style dance alongside Colt Prattes where she and her partner throw each other around, breaking tables and covering each other with neon paint.

The performance was so moving that she even performed it beat-for-beat at the 2012 American Music Awards. Via Billboard, at the time Pink stated in a press release that, “Making this video was the most fun I’ve ever had in my entire career. I never wanted it to end. It’s my favorite video ever.”

Released in the wake of the 2016 presidential elections, Pink’s “What About Us” from her seventh album Beautiful Trauma is still her most overtly political music video to date.

In it, the singer is joined by a diverse cast of dancers amid helicopter searchlights and police cars as voice-over from Chris Christie introducing Donald Trump at the Republican National Convention plays.

Paired with the song’s lyrics, the messaging is clear that Pink was demanding that society’s vulnerable communities, such as the immigrants and same-sex couples depicted in the video, need to be stood up for. Her fearlessness is one of the many reasons we love the musician!

From her 2019 album Hurts 2B Human, Pink’s music video for “Walk Me Home” was simply magical! The video stars the artist as she dances down city streets by herself, only to see that she is accompanied by shadows that dance alongside her.

Pink released a behind-the-scenes look of the music video being shot at Universal Studios and how her team was able to pull off the feat. In it, she describes the feeling depicted in the video as how, “You can be completely surrounded, but completely alone.”

The video was directed by Michael Gracey, who is best known for also serving as the director of the musical The Greatest Showman. It wasn’t the first time that their creative paths had crossed; in 2018, Pink recorded a version of the movie’s “A Million Dreams” alongside her daughter for the film’s album The Greatest Showman — Reimagined.