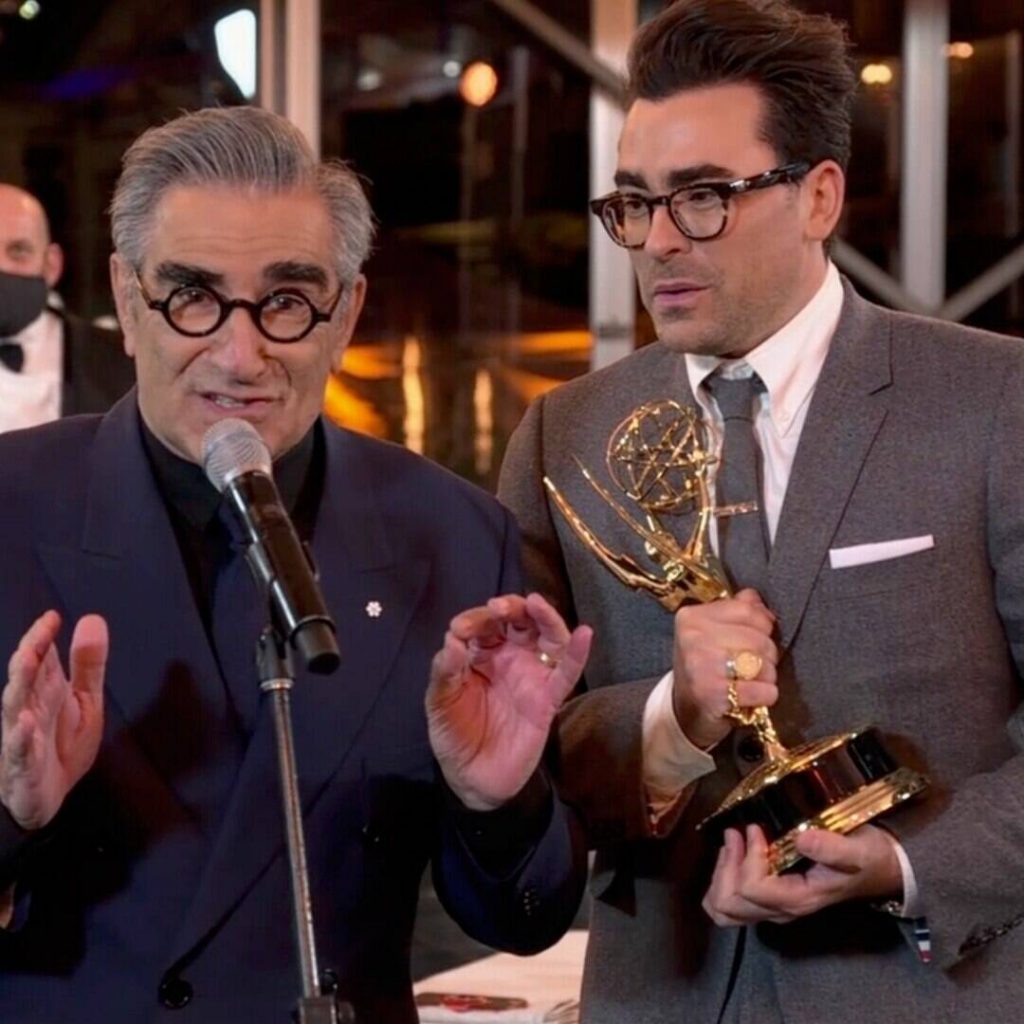 The Moira enunciations! The father-son hugs! The watch-and-win party taking place in Canada! Everything about the extraordinary night had by the cast of Schitt’s Creek—much like the show itself about a no-longer-rich family regrouping in the backwater burg that remains their sole remaining asset—was utterly charming. The beloved series of humble origins that put Pop TV on the map swept the comedy portion of the ceremony to the tune of seven Emmys (plus another for casting handed out earlier), including acting wins for Catherine O’Hara, Eugene Levy, Dan Levy and Annie Murphy—the Roses forever lodged in our hearts.

Father and son creators, executive producers and co-stars Eugene and Dan Levy were respective winners for Outstanding Actor and Supporting Actor in a Comedy Series, making them the 14th father and son to both have Emmys—but perhaps the first to each have four Emmys? Dan, also a winner for writing and directing (the latter with Andrew Cividino), caught up with his dad’s lifetime total in one night.

Somehow this was O’Hara’s first ever acting win, but fittingly her only other Emmy was one that she shared with her frequent collaborator Eugene Levy—Outstanding Writing in a Variety or Music Program for their work on SCTV, in 1982.

We’d shake a stern finger at the Academy of Television Arts and Sciences for not spotlighting Schitt’s Creek sooner (the show finally broke through with a handful of nominations in 2019), but voters did acquit themselves well this year in response to the show’s sixth and final season, making 2020 a bit brighter by bestowing 15 nominations on this group, who then set an Emmy record for most wins in a single season for a comedy.

“I also want to thank once again this young man,” Eugene said, turning to his son as they capped off their run with the win for Best Comedy Series, “who took our fish-out-of-water story about the Rose family and turned it into a celebration of inclusivity, a castigation of homophobia, and a declaration of the power of love.”